The camp is a mid-range accommodation in Ruaha National Park and semi-permanent, which is to say that, at the end of each season they break camp for the rains and re-establish for the new season. One of the benefits of doing this is that it means that game does not start to avoid the area around camp. Therefore, it is still very frequent to have a giraffe munching on an acacia next to your tent in the mornings! 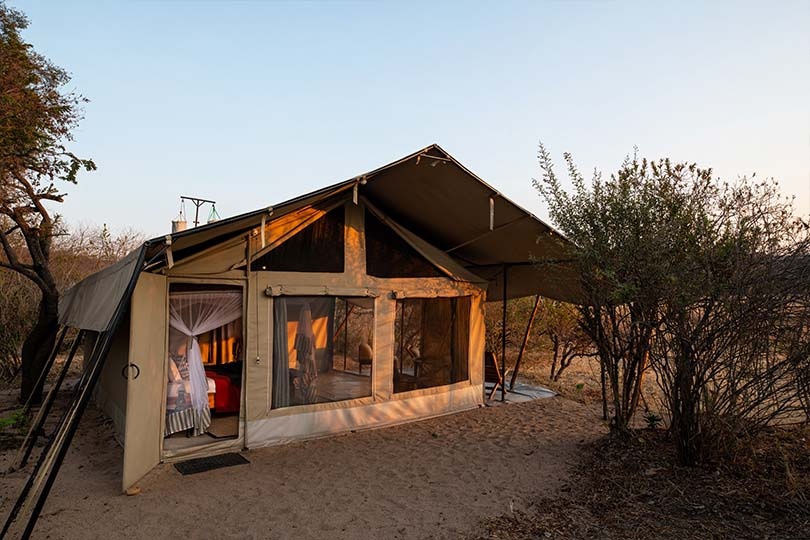 The tents and communal areas at Kwihala are very comfortable with flush loos ensuite and LED lighting etc….this is camping in real style! The food and service, likewise, is up to the highest standards and the food is hearty and very tasty.

As mentioned above, this is probably one of the best areas for game in the park and so they also really benefit from having this area to themselves so you really feel like you have the park to yourself (very rare in Africa these days). On the whole we really like the place and certainly recommend it.

Ruaha Hilltop Lodge is a mid-range lodge built on a hill with a wonderful panoramic view. The Lodge is 100km from Iringa on the Iringa – Ruaha main road and 5km from Tungamalenga village and near the boundary of Ruaha National Park.

The self-contained cottages are very comfortable and private, each with its own balcony with a beautiful view. The water is heated by solar power. At your stay at Ruaha Hill Top, Giraffes, elephants, and baboons and kudus can sometimes be glimpsed not far away.

Located right on the southern boundaries of the park it used to be that Jongomero was outside of the park boundaries and was therefore allowed to offer additional activities such as fly camping. Today, however, it is part of the park and bound by the regulations of being so. This is not a bad thing by any means and this secluded location really gives the feeling of being out in the middle or nowhere…which you are!

As mentioned above, the region around Jongomero is not known for being the most prolific for game, in part, we would argue due to its once not being the park and so the game would not have felt the same protection. Again, however, this is not a real drawback as part of the experience of coming here is to experience a real African safari rather than one where the game is “wheeled” out.

The camp and rooms at Jongomero are outstanding and have beautiful designs. They offer the highest standards while still feeling absorbed by the nature around. Using local dead woods the bed themselves have been formed using this stunning material and the canvas tents also have comfortable covered areas out the front from which to watch the daily procession of elephant to the watering hole out at the front.

MID-RANGE ACCOMMODATION IN RUAHA NATIONAL PARK. Set over on the western side of the park.It is away from the busier Msembe region of the park. Mdonya Old River, as the name suggests, is on the Mdonya River. This river seasonally runs through the region, attracting in game of all sorts.

The camp itself is relatively simple in its design. Also the tents offer simple comforts with running water, beds and covered verandah out the front. Similarly the main areas are also of the functional type with relaxed dining and seating areas. These also look out to the scrub bush that surrounds the camp.

As we mention in our review of its sister camp, Manze, this is a great little camp. The food and also service are both great, it is the perfect choice for those that are on limited budget. But also want to experience what safari has been about for the last 20 years or so.