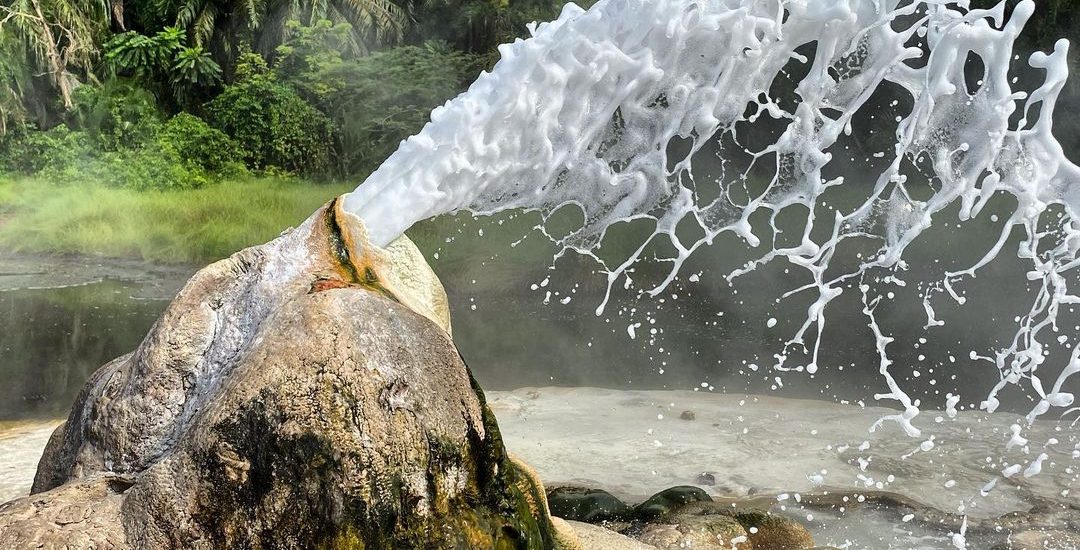 Sempaya Hot Springs in Semliki National Park: Located in Semuliki National Park, the Sempaya hot springs are the most famous attraction in the park. They lie in a lush swampy clearing close to the South Eastern corner of the forest of Semuliki. These hot springs are in two sites and are each distinct from each other namely the female and the male spring.

Semuliki Forest Reserve was created in 1932 and upgraded to national park status in 1993. It is the only tract of true lowland tropical forest in East Africa, hosting 441 recorded bird species and 53 mammals.

Large areas of this low-lying park may flood during the wet season, a brief reminder of the time when the entire valley lay at the bottom of a lake for seven million years.

There are four distinct ethnic groups that live near the park. The Bwamba farmers who live along the base of the Rwenzori. The Bakonjo who cultivate the mountain slopes. The Batuku cattle keepers who inhabit the open plains and Batwa (pygmies-traditionally hunter gathers) who live on the edge of the forest.

What do we find in Semliki National Park?

While Semuliki’s species have been accumulating for over 25,000 years, the park contains evidence of even older processes. Hot springs bubble up from the depths to demonstrate the powerful subterranean forces that have been shaping the rift valley during the last 14 million years.

This biologically diverse region also provides shelter to primate species such as baboons and chimpanzees, as well as other animals like elephants and antelopes. This forest hosts around 441 species of birds including 23 Albertine Rift endemics.

Hippos are common along the Semuliki river and so are crocodiles. More than 300 species of butterflies are present including 46 species of forest swallowtail, together with 235 moth species. Over 435 bird species are inhabitants of Semuliki National Park. The checklist includes 35 Guinea-Congo forest biome bird species, spot-breasted ibis, Hartlaub’s duck, Congo serpent eagle, chestnut flaned goshawk, red thighed sparrow hawk. Furthermore, you can spot another 12 species with extremely little distribution like the western bronze-naped pigeon, yellow throated cukoo and others.

The female spring has water boiling at 103 degrees, and it spurts hot water up to 2m above the ground while the male spring is more distant from the female spring and is reached by following a trail.

Water from hot springs is believed to cure certain diseases for example ringworm. There are also legends and customs related to the hot springs that you will get in detail by the help of a professional tour guide.

The female spring is visited by women who hope for a cure for infertility and other problems. Communities living near hot springs in Uganda usually have both spiritual and superstitious attachments to them. Uganda’s hot springs are often popular tourist destinations and locations for rehabilitation clinics for those with disabilities. The trail to the springs leads you through a patch of rain forest where red-tailed monkeys, grey-cheeked mangabeys and black and white colobus monkeys are common. Bird watching safaris are also stunning as you will enjoy an encounter with different bird species. Tourists occasionally boil eggs, cassava and green bananas in the two geothermal hot springs.

Where are Sempaya Hot Springs located

Sempaya Hot Springs in Semliki National Park are a remarkable natural attractions at the edge of the great Ituri Forest on the borders of Uganda and the Democratic Republic of Congo. The name ‘Sempaya’ originates from a Kiswahili phrase – ‘sehemu mbaya’ which means ‘the difficult side’ owing to the challenges during the construction of the Fort portal – Bundibugyo road along the ridges of the Rwenzori Mountain ranges.

The background of the Sempaya Hot springs

Sempaya Hot Springs in Semliki National Park exist in two springs that is the female hot spring and the male hot spring (although in different locations). While scientists have a technical explanation to the origins of the hot springs, the local people of the area called the indigenous Bamaga clan who stay near the hot springs in Semuliki national park, have their own interesting story about the existence of the Sempaya hot springs.

The inner female spring is referred to as Nyasimbi by the local Bamaga tribe and is believed to be a sacred location of their female god. The location of the spring is a 30 minutes’ walk off the main road into the beaten forest tracks. Once at the spring, it is thrilling to see steamy hot water boiling at approximately 103 degrees Celsius, bubbling and jetting out of the ground. Tourists have the honor of boiling eggs and cooking bananas in the hot waters. The female spring is invaluable to the local women who go there to offer sacrifices and prayer to appease their female ancestor. The barren asks the female god for fertility and those who are pregnant pray that the mother spirit grants them an easy delivery during childbirth.

The outer male spring is referred to as Mumbugu by the local Bamaga and is believed to be the sacred shrine of a male god. We find the spring after an hour-long journey into the woodlands. It is associated with wealth and sacrifices are offered by men with the aim of appeasing the male ancestral spirit in exchange for prosperity.

Other activities to enjoy in Semuliki National Park

Besides the fascinating hot springs, a tour to Semuliki National Park has a lot more to offer. The park has numerous attractions; River Semuliki which snakes through the mountains and meanders away pouring its waters into Lake Albert, the great Ituri Forest of the Congo basin, the legendary Rwenzori Mountain ranges, wetlands and woodlands which are a habitat to various bird species and wildlife and so much more.

Semliki Wildlife Reserve has 3 main tracks across its Savannah grasslands. The animals to see while driving through include; forest elephants, waterbucks, buffalos, warthogs, Uganda kob, crocodiles and pygmy hippos. During night game drives, you can see Leopards, bush babies, white-tailed mongoose and other night creatures. The drives take place in the morning, afternoon and night in the company of professional game rangers. 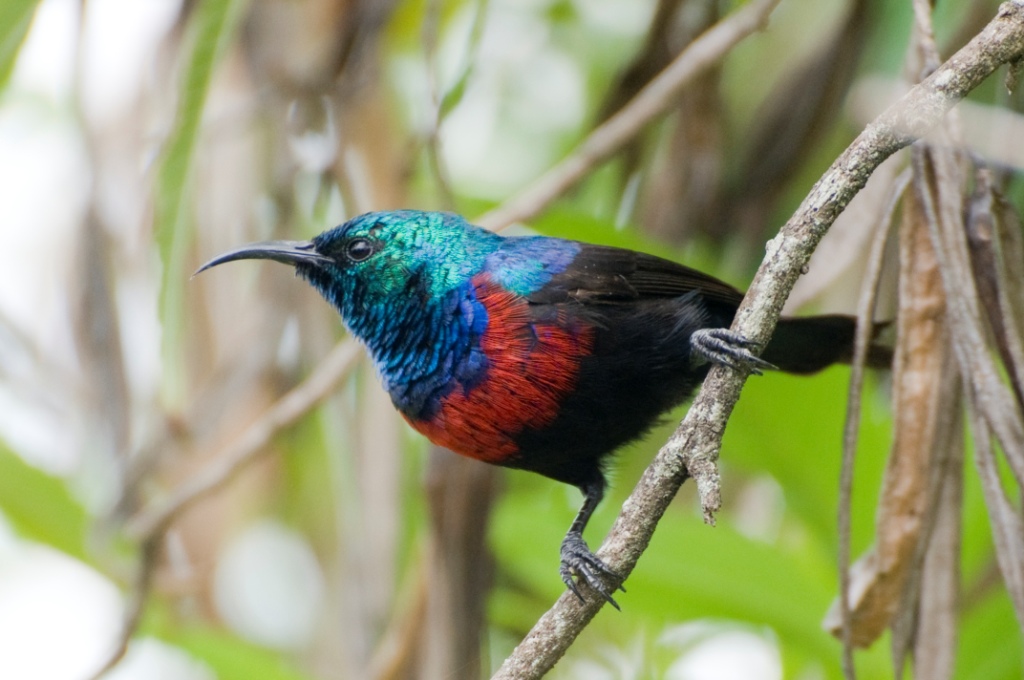 Semuliki has 3 main hiking tracks; Kirumia trail which runs through the forest to Semuliki river, Sempaya nature trail leading to the hot springs and primates, and the Red monkey track which leads to the park’s Eastern border where you especially sight the rare deBrazza’s monkey. Semuliki National Park is a great place for a nature lover/birding enthusiast.

A safari trip to Semuliki national park will give you a chance to encounter the pygmy Batwa who are the native forest dwellers. Before their eviction from the forests to create reserves, the Batwa survived as hunter-gatherers and drew their livelihood – food, medicine, tools and shelter, from Semliki Forest. Tourism has now become a source of income for the Batwa. Through cultural performances; music, dance and drama depicting their traditional way of life, the Batwa are able to earn some money. A cultural village for the Batwa is currently under construction.

There are available accommodations facilities ranging from luxury, mid-range and budget facilities. Semuliki national park itself does not have accommodations for visitors. The only place to stay while there is finding a hotel in Bundibugyo town or stay at one of the lodges in Toro-Semuliki wildlife reserve at Semuliki Safari lodge which is a luxury lodge, Ntoronko Game lodge, Bamaga Bandas and campsite (these are provided by Uganda Wildlife Authority for backpackers with very low travel budget).

Visiting the Sempaya Hot springs is one of the most fascinating activities that you could ever do. At Pamoja Tours and Travel, we also offer safari packages in Kenya, Tanzania, Rwanda, Zanzibar and the Democratic Republic of Congo. Make your booking with us today and turn your safari dream into a reality!