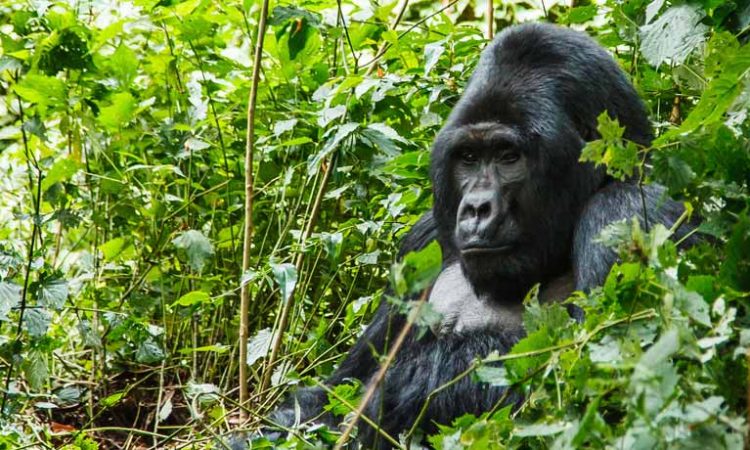 The Mubare gorilla family is one of the 19 habituated families in Bwindi Impenetrable National Park. This family inhabits the Buhoma sector of the park and consists of 18 members originally led by a silverback known as Rugondeza.

This family is one of the oldest gorilla families in Uganda. It was among the first families to become available for tourism in 1993 after a habituation period of two years. Habituation refers to the process of training gorillas to get familiar with human presence and interaction.

Furthermore, the name Mubare is a local word that means “hills”. This gorilla family was called so because it was first sighted by tourists in the hills located deep in Bwindi Impenetrable national park (https://africasafaritravellers.com/bwindi-impenetrable-forest-national-park/).

The Mubare family consists of 18 members with their original leader having been Rugondeza, the silverback. In gorilla families, the leader is the dominant male. Additionally, the body of the silverback usually has patches of silver hair thus the name silverback.

Unfortunately, the Mubare family has been losing many of its members over the years. In 2012 there were only 5 remaining members. During that time, the group was attacked and some of the females were taken. Certain factors such as the death of the young ones, deaths during fights and the migration of some gorillas to other groups contributed to the decline of the family.

Above all the stated tragic incidents that happened to this family was the death of their leader, Rugondeza in June 2012. Rugondeza died in his sleep at the age of 50 years and the cause of death was old age.

Later on, Kanyonyi became the new leader turning the tragedy into hope. As the new leader, he was able to add 8 members to his group and thus the expansion of the Mubare family.

Also, the trekking time for this family is about 5 or more hours. If you decide to track it, you will get an opportunity to see Rugondeza’s grave.

At Pamoja Tours and Travel, we offer amazing gorilla trekking packages and some of them include the following;

If you would like to track the Mubare family, kindly contact Pamoja Tours and Travel to book your gorilla trekking safari. Being able to interact with the mountain gorillas in their natural habitat is one of the best experiences you could ever have.

Thank you for choosing Pamoja Tours and Travel.