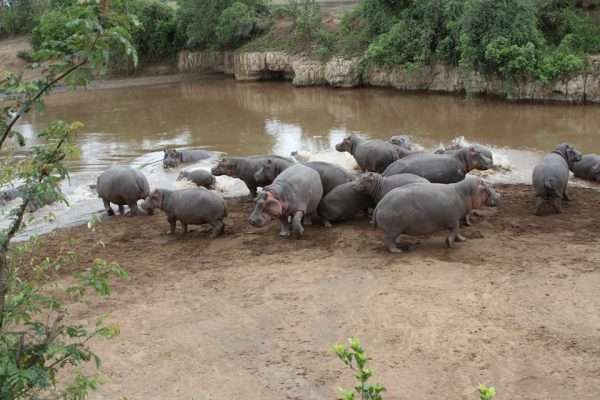 The 10 Day Highlights of Kenya wildlife safari takes you through the Tsavo East national park, Tsavo West national park, Amboseli national park, Samburu national park, and Maasai Mara national reserve. In 1898, long before Tsavo National Park was created, a pair of maleness lions terrorized the area. They reputedly killed 135 railway workers who were building the Kenya-Uganda railway. These workers built thorn fences known as bomas around their tents and set traps and ambushes so as to avoid the Maleness Lions which were man-eaters. the majority were shot by Lt. Col. John Henry Patterson.

Tsavo East National Park is 333 km south-east of Nairobi, and 173 km north-west of Mombasa. Its relative closeness to the beaches and tourist attractions around Malindi and Mombasa make it an ideal one-day wildlife safari destination for those who do not want to stay overnight.

Tsavo East National Park is a natural area of flat, dry plains, with thorny bushes and swampy marshland near the river. It is teeming with diverse Kenyan animals including large families of giraffes, gazelles, heartbeats and zebras, as well as the “Big Five” must-see animals – buffalo, African elephants, lions, rhinos and leopards.

Masai Mara National Reserve is one of the most popular tourism destinations in Kenya- Africa. The reserve is located in the Great Rift Valley in primarily open grassland.

Wildlife tends to be most concentrated on the reserve’s western escarpment.

The Masai Mara is regarded as the jewel of Kenya’s wildlife viewing areas. The annual wildebeest’s migration alone involves over 1.5 million animals arriving in July and departing in November.

This tour will take you to the most well known national parks of Kenya. The famous Masai Mara game reserve where between July and October you have high chances of seeing the wildebeest migration and Tsavo National Park national where man eaters are found, Amboseli National park and Samburu National reserve.

Detailed Itinerary for the 10 Day Highlights of Kenya wildlife safari

On arrival you will be picked up from the airport in the morning, you will drive to Tsavo East National Park, which is renowned for its large number of elephants and the famous “man eating” lions and you have a stopover in a nearby town of Voi in the Taita-Taveta district for refreshments and fuel refilling proceed with the journey arriving at Voi Safari Lodge, where you will check-in and have lunch. In the afternoon you will experience a game drive in Tsavo East searching for wildlife before returning to the lodge for dinner and your overnight stay

Day 2. Game drive and a visit to Aruba Dam

You will depart on an early morning game drive in search for wildlife before returning to the lodge for breakfast. After breakfast, you will spend the full day in Tsavo East National park in search of its popular residents, including well known predators, zebras, wildebeests, giraffes, and hippos to mention but a few. During the day you will enjoy a packed lunch and a visit to the Aruba Dam for it view then back to your new home

After an early morning game drive and breakfast at the lodge, you will depart Tsavo East and head to Tsavo West National Park. You will check-in at Ngulia Safari Lodge and have lunch before departing in the afternoon to visit a rhino sanctuary. Furthermore, Upon returning to the lodge for the evening, you may be lucky enough to view one of the big five that is a leopard

Have a cup of coffee and depart the land of “man eaters” heading to Amboseli National park arriving in the afternoon hours for lunch and check-in at Amboseli Setrium after you go for an evening game drive within the Amboseli which lies at the floors of Mount Kilimanjaro in search for wildlife species such as Elephants then back to the lodge for dinner and an overnight stay.

Early breakfast, then proceed for a morning game drive where you will visit Mzima Springs to see hippos and fish in crystalline clear water. There are possibilities of seeing crocodiles and monkeys. Later proceed to Amboseli National park arriving in lunch time and check in at Amboseli Setrium lodge.

You will be picked up from your lodge in the morning after breakfast, thereafter you will be driven north past the equator to the northern frontier district. Continue to the semi-arid Samburu National reserve and check in to your lodge, lunch and overnight stay. There will be time to settle in before your safari adventure. Set out for an afternoon game drive in the reserve in search for wildlife such as elephants, zebras among others. Return to the lodge before dark for dinner and overnight stay at Samburu Game Lodge

Set off for an early morning game drive in the reserve. This is usually the most popular game viewing time. During the early hours temperatures are low, thus providing a favorable atmosphere both for the game and the viewer. Lion, Cheetah and Leopard roam the vast grasslands in search for their next meal, it may be an unsuspecting impala or even a small one like the warthog…whatever the players, and the spectacle of nature unfolding is always inspiring! Then back to the lodge for breakfast and lunch in the afternoon hours. Later in the evening go for a game drive with in the park and if lucky you may spot leopard and come back for dinner and an overnight.

After breakfast leave Samburu for Masai Mara arriving in time for lunch. Check in at Mara Aardvark lodge for have lunch. Go for afternoon game drive through the park in search of the Lion, Cheetah, Elephants and Buffaloes to mention but a few. Then back to your new resident for dinner and overnight at Mara Aardvark Lodge.

Early morning game drive in search for wildlife species, drive return back to a lodge for breakfast. After breakfast Full day spent in the park with packed lunch in search of its popular residents like the well-known predators and their opponents like the Zebra, Wildebeest, Giraffe, Hippo and the dangerous Crocodiles with a visit to Mara river. Meals and overnight at Mara Aardvark Lodge

Have an early breakfast and depart the land of wildlife heading to Carnivore restaurant for lunch after proceed to the airport to catch up with a flight. 10 Day Highlights of Kenya wildlife safari, Kenyan safari vacation tours