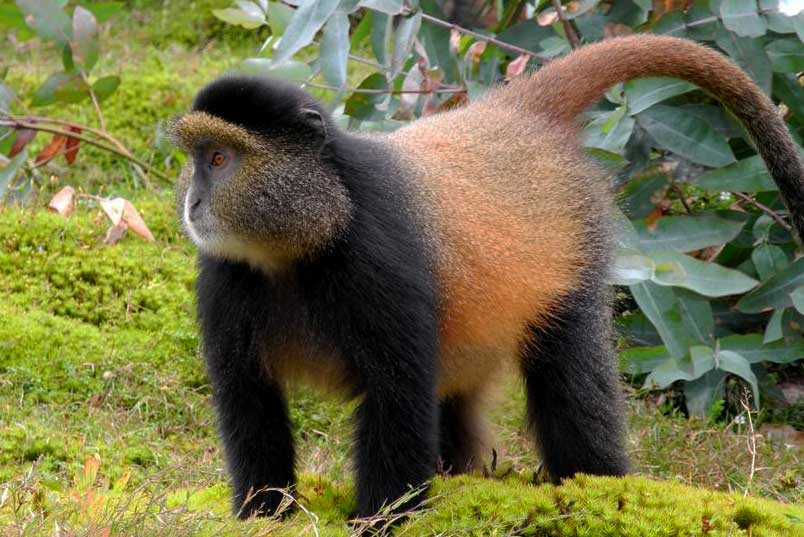 Golden Monkey Tracking is an activity that involves spotting the magnificent creatures that one can only find in Uganda and Rwanda in East Africa. The golden monkeys are believed to be sub species of blue monkeys. However, the golden monkey has a golden-orange patch on its upper flanks and back. More to that, they are usually on the move in groups of 30 members up to 60 members.

Furthermore, they move in search for food especially fruits and bamboo shoots. Their constant movement makes it difficult for tourists to view them.

These monkeys are only seen in Virunga regions of Rwanda and Uganda, volcanoes national park in Rwanda and on Mgahinga national park which is a home to about 300-400 species similarly, Congo has got these golden monkeys however, they are not habituated which makes them very hard to track in the African amazon forest of Congo. The golden monkeys have been included on the IUCN list of endangered primate species.

The best time to track the monkeys

Rwanda and Uganda experience the same weather conditions therefore the best time to track the golden monkeys during the dry season which is in the moths of June, July, August, December, January and February. This is because the paths in the forests are usually drier and there is no surprise weather changes and rain which may put a pause on the trek however, during this season, there are very high numbers of tourists and yet the permits are limited for the safety of the animals therefore, you are advised to book your trip earlier and the golden monkey permit.

Golden monkey tracking has its own rules and regulations therefore the tourists are escorted by UWA/RDB ranger to assist in interpreting nature and also leading the way into these thick forests. The following are the golden rules for viewing these golden monkeys. Note UWA is Uganda Wildlife Authority and RDB is Rwanda Development Board.

Since the golden monkeys are always on the move, tracking them may be challenging.

In addition, the activity requires walking for quite a long period. It further involves hiking hills which may be tiring.

Sometimes, you may not be able to see a single group of golden monkeys while trekking and this requires a bit of patience to successfully see them because they never create nests since they are always on the move.

For the people with disabilities or the elderly, this trek may be hard for them since it is tiring however, there has been a solution for this challenge with the introduction of the African helicopter where a person who will need this service gets to book people who will help him/her trek by carrying him on a metallic or wooden sedan chair who are about 12 bodied men.

This gives a chance to the people with such need to take part in the trek at a cheap cost. However, these prices are flexible.

A tourist is expected to get very thrilling adventure during this tour since these primates can only be seen in Uganda, Rwanda and Congo in the whole of east Africa

Expect to gain a high level of physical fitness. This is because this trek requires a person to move for over four hours. This may seem hectic but it is worthwhile.

Cultural experience in both Uganda and Rwanda

In Uganda, get to share with the Batwa people of Western Uganda in the Mgahinga national park. Also possessing the name pygmies, these people have a rich cultural, economic and social background.

In Rwanda, in the volcanoes national park is the Iby’iwachu cultural village. You can find this place in Musanze near Kinigi. While there, get to see their economic and social culture.