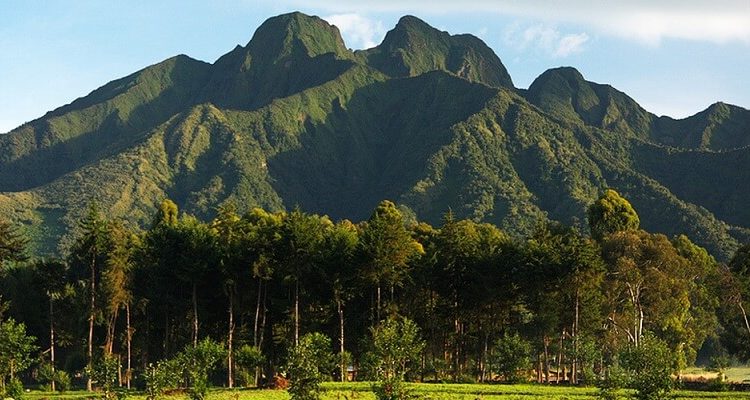 Volcanoes National Park is located in the Northwestern province of Rwanda in Musanze covering about 160km2(62sq.meters) of the rainforest and bamboo.

The park got its name after the making up of different dormant volcanoes. Therefore it shelters 5 of the 8 dormant volcanoes in the Virunga Mountains. These include, mount Bisoke, mount Gahinga, mount Muhabura, mount Sabinyo, and mount Karisimbi.

Volcanoes National Park is a sweet home to different flora and fauna in Rwanda. It harbors mammals like the endangered mountain gorillas, golden monkeys, buffaloes, hyenas, black fronted duikers, and the bushbucks. Elephants can also be sighted though on rare occasions.

It harbors around 178 bird species. 12 of the main species and 15 of the subspecies being endemic to the Virunga conservation area and the great Rwenzori Mountains.

The fact that Volcanoes National Park is so much known for mostly harboring the endangered mountain gorillas which dominate the park as far as wildlife is concerned, Gorilla Trekking is the major activity enjoyed by most tourists because of its unforgettable experience. Trekking the gorillas in this Park is quite fun as you will be able to see gorillas in their different habituated gorilla groups/families.

No visitor leaves the Park without visiting the Ruhondo and Burera twin lakes which are found at the base of Muhabura volcano. These are close to Rwanda and Uganda border at the edges of Volcanoes National Park.

Volcanoes National Park shelters 5 volcanoes (mount Bisoke, Mount Karisimbi, Mount Sabinyo, Mount Muhabura,
and Mount Gahinga) all of which are elevated on different meters above sea level. Mountaineering on these volcanoes is amazing as they give you a clear view of the spectacular landscape. You will be able to view the twin lakes (Lake Ruhondo and Lake Burera), Nyamuragira volcano, Nyirangongo, Muhabura volcano. You will also have a clear view of Crater Lake on the top of the mountain.

This tomb acted as a base for the American Primatologist Dian Fossey who turned out to be so passionate about gorilla Conservation. Dian Fossey’s works still live today. In order to remember her works, the Rwanda Wildlife Conservation Board decided to set up and conserve this tomb as a tourist site.

In your community Tour, you will get a chance to visit the lby’iwacu village where you can meet and interact with the local people. Get to see and know their lifestyle. Be entertained by the local people in this village by their traditional practices like music, dance, and drama. Get to know and see locally made craft items like baskets, mats and so much more.

When to visit Volcanoes National Park?

Note; Don’t forget to carry cameras with you any of your tourist activities at volcanoes National Park. Take as many photos as you wish on every activity. Additionally, ensure to carry suitable tour shoes and a raincoat.

How to get to the park?

You can choose to use Rwanda Air and fly to Kigali International Airport as it has got private flights operating thought the whole week. Safari vehicles are also available. It takes only a few hours to get to the park because of the good roads in Rwanda.
Note; please inform Pamoja Tours and Travel a bit earlier and we make the necessary arrangements.

Accommodations in and around Volcanoes National Park