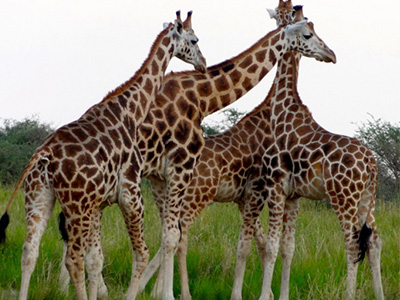 Kidepo Valley National Park is in the remote Karamoja region in the North Eastern corner of Uganda. Kidepo’s scenery is, beyond any doubt the most beautiful in the whole of the East African region.

Karamoja is the most remote and unspoiled region in the country and is inhabited by the the legendary fierce Karamojong warriors. Most of these warrior tribes whose lives are centered on cows still live the simple, basic nomadic life style their ancestors lived centuries before them.

Not surprisingly, these vast, untouched plains are often referred to as the wilderness because of the fact that human development has hardly had any impact on the park and its surroundings. Kidepo, with its unique climatic conditions, has a greater diversity of animals than most other parks in Uganda and 28 of the species found in Kidepo can be found in no other Ugandan national park.

This charming spot, despite its remoteness did not escape the ruthless poaching during the political turmoil of the late 1970’s and 1980’s. Sadly, some animals like the Striped Hyena, Lesser Kudu, Grants Gazelle and the Beisa Oryx are apparently extinct. You can also view animals like elephants, giraffes and zebras in the park.

The star attraction is, by far the magnificent scenery that brings a certain liberty to the soul. The wide grassy plains speckled with Acacia trees and shrubs that just go on and on until the horizon meets the rugged Napore Range to the south-west and the Morongole mountains to the East. Also the mysterious ‘Kidi Rwot’ Rock and the large Granite outcrop at Kitenga provide some breath taking scenery.

This area is the source of two main permanent rivers, a couple of their distributaries and numerous seasonal rivers. The Rivers Kidepo and Narus flow slowly northwards towards Sudan where they meet the Nile. I think that explains the lush green in this largely semi-arid area.

The Karamojong tribes, who have, against all odds shunned development and preferred to stick to their cultural values, inhabit the vast plains surrounding the national park. They are nomads whose lives depend on cows and they live in manyattas similar to the Masai of Kenya. Another similarity between the Karamojong and the Masai is their love for colorful dress.

Also, the park offices can organize a visit to their home steads and kraals to see traditional customs, stools, manyattas, jewelry and cultural dances. This being the only National Park in Uganda Where Giraffes and Zebras can be viewed together, makes it a special place to visit. Most of the wildlife is in the Narus Valley and you can observe many animal species from the overlaying Apoka Rest Camp.

This park hosts 28 animal species’ that you cannot find in any other National park in the country. These animals include the Bat-eared fox, Caracal, Klipspringer, the Cheetah among others. Other widely seen species are the Lion, Elephant, Leopard, Zebra, Giraffe, Kongoni, Buffalo, Oribi, Side-striped Jackal, spotted Hyena among many more. Kidepo valley national park is truly the most Wild and unspoiled place in Uganda.

Other birds of prey include;

Kidepo Valley NP is accessible both by air and by road. Various charter airline companies can arrange a return trip though travel by road is more rewarding.

Furthermore, we find places like the large granite outcrop at Kitenga and Kidi Rwot rock outside the national park along the road. There are several routes to take by road though the road from Kampala through Karuma. However, Lira and Kotido is the most common route since it passes near the Murchison falls national park and is very rewarding in terms of scenery.

Currently, Kidepo does not offer Luxury accommodation since the Apoka Rest camp is still under reconstruction. Never the less, it runs a comfortable do it yourself hostel that has 14 bandas or cottages at Apoka. It is advisable for visitors to bring food to last them the entire duration of their stay. The Kakine campsite is also available for campers.