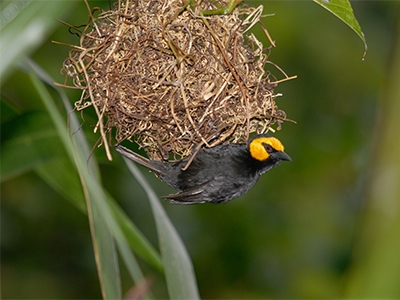 After arrival, head out to Mabamba Wetlands on the shores of Lake Victoria. This is one of the few remaining swamps in the country protected by the local communities – an extensive papyrus swamp with its labyrinth of channels and lagoons, classified as an Important Bird Area, and home to several pairs of Shoebills, Uganda’s most famous avian resident. This charismatic monotypic species is certainly amongst the most sought-after birds in Africa, and we’ll make special efforts today to find it by paddling through the channels by boat. There will of course be a good selection of classic East African water birds, including Pink-backed Pelican,Long-tailed Cormorant, Goliath Heron, African Open-billed, Saddle-billed, and Marabou Storks, Hammerkop, White-faced Whistling-Duck, Yellow-billed Duck, African Fish-Eagle and many others. Later in the afternoon, we drive to Kibale Forest N.Park. Dinner  and overnight at Chimpanzee Guest House.

Transfer to Semliki birding on the way . Dinner and overnight at Vanilla Lodge.

After breakfast we will transfer to Queen Elizabeth National Park birding en-route through the northern side of Rwenzori Mts that are dry Savanna woodland and later bird along the edge of the Park later check in at the lodge in evening. Dinner and overnight at Bush Lodge.

After breakfast, a morning game drive and birding will be ideal. Lunch at the lodge and go for the boat launch on Kazinga Channel in the afternoon where we shall see a variety of wild life and bird life as well. A variety of game such as hundreds of hippos, crocodiles will be viewed. Other animals like Elephants, Buffaloes, Uganda Kob, Bush buck, Warthog will include Green-backed heron, Yellow billed stork, Saddle billed Stork, African spoonbill, martial eagle, African Skimmer, grey headed gull, grey, purple and goliath herons, black Crake, African Crake, Common quail and Rufous-naped lark. Late in the evening after the boat we head for an evening drive for Night jars. Dinner and overnight as above.

Early morning transfer to Bwindi  N.Park via Ishasha and we shall have our lunch on the way. At Ishasha, We shall see a variety of Game including climbing lions, Elepahnts Buffaloes and other game. Having reached in the evening , we shall bird around the hotel on arrival in the evening for species like Blue quail, African Crake, Ross’s Turaco, Jackson’s Pipit, Red-headed lovebird, Cassin’s Flycatcher, Black bee-eater,White-backed,Lappet Faced,Ruppel’s,White headed,Palmnut Vultures,Martial,Wahlbergs,Weterh Bandedsneck,A.Fish Egales, Shining Blue King fisher have our dinner and spend a night at Bwindi view bandas.

Day 11: Early morning boat for the African finfoot and later transfer to Entebbe.