Furthermore, these ranges that start in Uganda and roll on into the DRC offer a breathtaking view. Three defunct volcanoes make up the part of the Virunga ranges that are found in Uganda. The tallest of the three is Mountain Muhavura which goes up to an altitude of 4127 metres above sea level.

More to that, Muhavura, loosely translated from the local dialect, means the guide. It was aptly named so, in the olden days because it used to act as a guide to wary travelers as it could be seen from miles away. The shortest of the three is mountain Gahinga, from which the national park derives its name. It goes up to an altitude of 3474 metres above sea level. 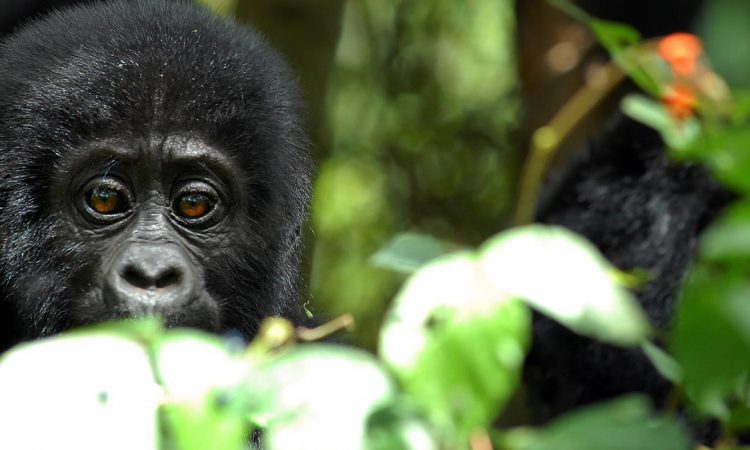 To begin with, the name ‘Gahinga’ was derived from the small piles of stones that are used by the locals to mark their garden boundaries. The southern most of the three is mountain Sabinyo, which is a little taller than mountain Gahinga at an altitude of 3669 metres above sea level. It has the most unique shape of the three and Sabinyo loosely translates to old man’s teeth and curiously looks like the lower jaw with three peaks that look like sharp pointed teeth. The scenery of these grand rolling mountains is breathtaking when seen from the plains below. On a cloudless day, the top of mountain Muhavura can be seen and if you are lucky you can see the tip of mountain Nyamuragira in the DRC which is the tallest in the ranges.

Mountain climbing is a key attraction on all the three volcanoes and it requires quite a number of items before one can achieve the commanding view of the plains and hills below. Special mountaineering gear is a must, physical fitness to a certain degree and the will, or madness to go on and accomplish this amazing feat. The most rewarding view is, obviously at the top of the tallest of these volcanoes, Mountain Muhavura. Once at the top, you can see as far away as Lake Edward in Queen Elizabeth National Park, Bwindi Impenetrable forest and the peaks of mountain Rwenzori not forgetting the splendid view of the other Virunga volcanoes. As you go up these mountains, you will not miss the deep, wide gorges in the green lush vegetation, they are such an enchanting sight.

The Garama caves are also another key attraction that you cannot afford to miss. These caves were once a haven for the Pygmies, locally known as the Batwa. They had lived there for generations until they were recently resettled. Furthermore, Mgahinga gorilla national park lies at the edge of the Albert rift valley and offers a number of the famous Albertine rift endemics and a variety of other birds like the rare Rwenzori turacos, Ladgen’s bush-shrike and the scarlet-tufted malachite sunbird. The handsome Francolin, Dusky turtle dove, Rwenzori Nightjar, alpine chat, and Kivu ground thrush among others are always in sight along the numerous trails that traverse the National park.

The most famous attraction in this national park is definitely the Mountain gorillas that are shared by Uganda, Rwanda and the DRC. These gentle giants are one of the most endangered species on the planet and only occur naturally in these volcanoes and Bwindi impenetrable national park. Only one group of Gorillas is currently available for tourists. The Nyakagyezi group consists of two silverbacks, three adult females, four juveniles and two infants.

To avoid disappointment, it is advisable to book gorilla permits three months in advance. Other wildlife in the Mgahinga gorilla national park include primates like;

Bigger mammals such as;

Other animals that are mainly nocturnal include;

Kisoro is located at the south-western tip of Uganda and is roughly 530 km from the capital, Kampala and it can be accessed by road or by air. By road takes you approximately 460 km on tarmac road from Kampala to Kabale and 80 km of murram road to Kisoro town. It’s an additional 13.5 km to the park gate.

It is advisable to go for the road trip, as it gives you a chance to view other wildlife. You will see mostly birds as well as other attractions en-route in the comfort of a 4×4 car. More to that, attractions between the Kabale-Kisoro road include Lake Bunyonyi (the deepest in Africa). Also, you will view the Bamboo forest, which is a home to a number of animals, mostly primates.

There is a wide range of accommodation to choose from in Kisoro town. These, like in most camps are in three basic categories; Lodges like Traveler’s rest camp, Mt Gahinga Rest camp, Virunga hotel among others offer The Luxurious accommodation. Alternatively, you can book yourself in one of the more appropriately priced lodges that are numerous in Kisoro town like St Johns bar and lodge and the sky blue motel. There are several campsites in Kisoro most notably the Ruginana campsite which is a few kilometers from town and the Amajambere Iwacu community campground that lies directly outside the entrance gate.