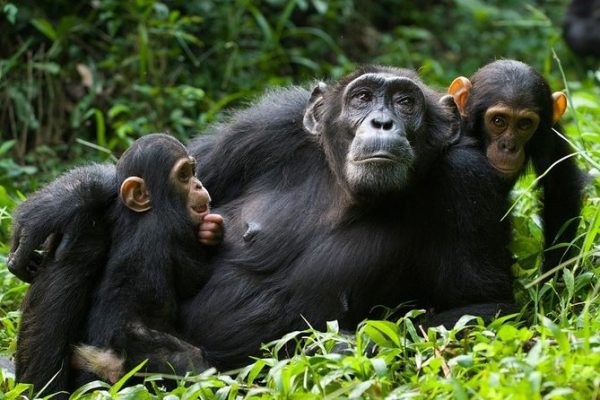 Chimpanzees are species of great ape native to the forest and the savannah tropical Africa. These are usually covered in black hair however it has a bare face, fingers, toes and palms of the hand and soles of the feet. These usually weigh about 70kgs for the males and 50kgs for the females. These are intelligent in nature from the ability to remember signs, tool use, cooperation and culture among themselves. This can be seen when a member among them dies, they usually act frenzy (uncontrolled wild behavior) with vocalizations and aggression while they touch the corpse. They also use tools like grass, leaves and rocks when foraging for termites and ants, nuts, honey etc. this displays a high intelligent level for these gentle creatures that is why everyone should take part in the chimpanzee tracking experience to have an exciting adventure in east Africa.

Chimpanzee tracking being a very exciting activity offered in the areas of east Africa, this activity involves the search of chimpanzee in their habitants across different heavily forested areas. However, this activity has got quite a number of rules and regulations for the person to take part of the experience and these rules are drafted by the par’s authorities for the safety of both the tourists and the chimpanzees.

Where to go chimpanzee tracking in east Africa
Uganda the pearl of Africa
Uganda is one of the unique countries in east Africa where you will find about 13 types of primates of which some of these are not found anywhere around the world. Uganda is also a home of a number of mammal species and different bird species which can be seen during the chimpanzee tracking experience. This kind of tracking can be done in Queen Elizabeth national park; this park being the second largest park in Uganda and it offers over10 primates of habituated chimpanzees. Second is Bwindi impenetrable national park which gives you the best of the chimpanzees, olive baboons, black and white colobus monkeys, and bushbucks etc. which are about 120 mammals.

Odzala-Kokoua national park provides you with a number of species besides the chimpanzees like the lowland gorillas, forest elephants and over 444 bird species which will give you the most thrilling experience in Congo. Second is Virunga national park, being the oldest national park in Africa with a dense forest, lava lakes and savannah plains, during chimpanzee tracking, a tourist is expected to get the best time ever in the heart of Africa while in Congo.

Rwanda as it is usually called, the land of a thousand hills offers the best chimpanzee tracking experience on its volcanic peaks with thick forests in places like volcanoes national park, Nyungwe forest national park which is located on the ridge between the Nile and the Congo rivers. This gives a chance to a tourist to enjoy other activities while on your chimpanzee tracking safari like white water rafting on these rivers. This is not only a home of habituated chimpanzees but also a home for other species like the Ruwenzori colombus and the L’hoest’s monkey.

Costs.
First of all, anyone who is going trekking requires a permit to track the chimpanzees and the costs differ according to different specific countries. This is done to protect these species from danger and hence these permits are limited.

What to pack for the trip?

Note: a porter is a person who carries daypacks for the tourist. These are usually considered as extra help for the tourists since tracking may get a bit tiring and these come at a cost of about 20USD depending on the country and the place where a tourist is going to go tracking.

Famous activities to do in Murchison Falls national park

Activities to do in Ruhija sector after Gorilla Trekking