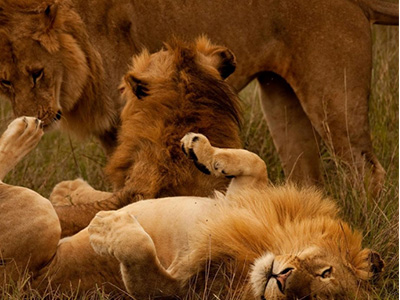 Queen Elizabeth National park, which is situated in South-Eastern Uganda , was named after the queen of England. Queen Elizabeth national park is certainly Uganda’s most popular game reserve, and this is not only because it boasts of more bird species than any other park in Africa, but also because it has one of the most complete and complex ecosystems imaginable in terms of animals found there and their respective habitats. From the Katwe explosion craters to the Lakes George and Edward connected by the amazing Kazinga channel and on to the Maramagambo forest, Queen Elizabeth National park is truly a gem.

Queen Elizabeth National park also has one of the highest recorded numbers of mammal species in the national parks of Uganda. 95 species have been recorded so far and it is important to note that this list is made up of both savannah and forest species.

The main highlight at Queen Elizabeth national park is definitely the Kazinga channel launch trip which allows you to have as close an observation as possible of the thousands of Hippopotami and the occasional Crocodile that inhabit these shores. The boat trip also offers an excellent view of animals like herds of Elephants, Buffaloes, Waterbucks, Kob and the big cats as they come to quench their thirst on hot afternoons. Other animals that can be found in the Savannah plains that are dotted with Acacia and Euphorbia trees are common Warthogs, Egyptian and Banded Mongoose, spotted Hyena, Bushbucks among others.

The Forest and Ishasha area offer you a pleasant surprise in form of a number of primates like Chimps, black and white Colobus, red-tailed Monkeys, olive Baboons, vervet Monkeys and at some of the campsites in Ishasha, some of these primates will come and pay you visit!. The other animals found in this region include the Spectacular and elusive giant Hog, the unusual Topi and famous tree climbing Lions of Ishasha. Large numbers of Lions are common and these magnificent cats are can usually be seen lazing under trees, at the shores taking a drink of water or if you are lucky, hunting.

Their smaller cousins, the Leopards are by far more elusive as they are shy and reclusive animals. Also, they prefer lurking in trees as they wait for their next meal. On the other hand, the Hyenas have made it a habit to hang around Mweya lodge at night especially on barbeque evenings.

The National park is quite charming and leaves a very scenic and picturesque image imprinted in your memory.  From the Katwe blast craters at the foothills of Mountain Rwenzori, through the Vast savannah plains and wide Maramagambo forests with its thick undergrowth, past the Lakes and numerous rivers and streams, this complex ecosystem truly is beautiful and such a sight to take in.

There are many routes to Queen Elizabeth National Park. However, the most direct road from Kampala is via Masaka and Mbarara towns to the Eastern gate of the park.

Additionally, a number of airfields in the park at Ishasha and Mweya peninsula serve the national park. You can get a superb aerial view of the national park. However, we encourage road use as it offers more in attractions along the road.

The park offers several types of accommodation ranging from luxury lodges to the most basic campsites. The luxury accommodation on offer include Mweya safari lodge at Mweya and jacana Lodge at the Maramagambo forests. The more pocket friendly form of accommodation are Bandas and cottages. For instance;

For the communication situation, the park has connections to Uganda ‘s telecommunication companies, as is most of the country.