Serengeti National Park covers about 14763 square kilometers of endless rolling plains that extend up to Lake Victoria and also reach up to the Kenyan border. It enchants travelers with magnificent wildlife that include over three million large animals. The Maasai people usually call it siringitu a word which means “the place where the land moves on forever”. 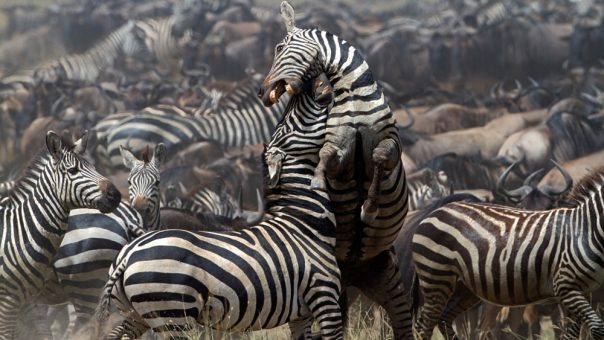 It is composed of two Biosphere reserves and two World heritage sites. Serengeti differs itself from others with a unique environment that has invited movie makers, numerous photographers, scientists, and writers. Its ecosystem is one of the oldest on earth and the main features of flora and fauna-climate has hardly changed in the past years.

About the Great migration

To most tourists around the globe, Serengeti is renowned for the great migration of animals (Wildebeest and Zebras). Usually every October and November, about 220000 zebras and millions of Wildebeests migrate South from the Northern hills to the Southern plains for lush grasses and tropical rains.

Later the journey continues to the North after heavy rain drops between April – June. This annual migration is very strong and pass through rivers and valleys until they reach their destination of interest.

These animals wander through a number of parks, wildlife reserves and other protected areas, but the main best points of view are Serengeti in Tanzania and Maasai Mara National reserve in Kenya.

Serengeti’s lush habitats are home to numerous Wild animals such as Zebras, gazelles, lion, impala, leopard, cheetah, hyena, Klipspringer and other larger mammals like elephants, hippopotamus and giraffes. Moreover, 500 species of birds are recorded in the Park including the migrant species.

Most safaris to Serengeti National Park start from Arusha town. The best option is to fly into Kilimanjaro International Airport, an airport which is just 46km from Arusha. You can as well land at Julius Nyerere Airport and use a domestic flight up to Arusha Airport.

If not that, you can transfer from Kenya’s Nairobi city up to an airport in Tanzania and connect to Arusha town by road.

From Arusha to Serengeti National Park, you can take a charter plane to one of the airstrips in the Park. The distance is about 325km and by road it takes about eight hours. Roads to Serengeti are bumpy but a road trip is more rewarding with views of Wildlife en-route. If you are going by road, then it is possible in two, three or more days.

What to do in the Park.

This River is located in the Central part of the Park and plays host a large population of crocodiles and other aquatic species. The place is also good for picnicking and as well a good viewpoint for the great Wildebeest migration. During the migration period, crocodiles are usually waiting to feast on different animals which are in the migration.

This excursion is one of the most exciting things to do in Serengeti and a highlight for travelers. Offered in the Northern or central part of the Park, a hot air balloon Safari is done during the evening hours at dusk. From the basket of the hot air balloon, views of the park with its abundant wild animals and rolling hills are inspirational.

If Wildlife doesn’t appeal, Serengeti National Park is also famous for culture. Make sure to visit the Maasai land and have an insight into the beautiful culture of the Maasai. Locals are also available to give detailed information about the varied wild animals in the Park.

Don’t miss to buy some local goods as souvenirs from different shops of Maasai women. Some of these goods like beads are sold at affordable prices. The best time for a safari to Serengeti is between April and May.

The wildebeest migration is an annual event and includes the movement of wild animals in large numbers. Millions of animals shift from one place to another and the migration happens mainly due to climatic changes that force the Wildebeest, zebras, and gazelles to travel from Serengeti to Kenya’s Maasai Mara. Best views of these animals occur usually in the morning.

These animals start with a move to Naabi hill in the south of Serengeti (during a wet and rainy season), then head to Lobo valley and Bologonja in the Northern region of the Park. While in Serengeti, you are free to view the Wildebeests, Impala, and Zebras as well as the African big five.