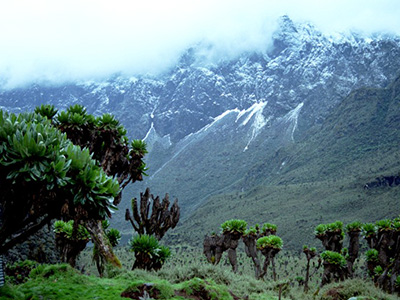 The snow capped Rwenzori Mountains are at the center of Rwenzori mountains national park. The striking Rwenzori Mountains, rightly christened “the Mountains of the Moon” by the legendary late 18th century English explorer Henry Morton Stanley reach a staggering 5109m at the Margherita peak on mount Stanley. The park lies on the Uganda-DRC border in south western Uganda and the panoramic and unique scenery it offers cannot be found anywhere in Uganda. It takes a lot of will, oomph, a stick to prod the mud and heavy clothing to take on this monster of a mountain(thankfully, the trails go around the mountains!)

Some of the unique vegetation found on these slopes that cannot be found any where else on the Earth except high altitude tropical African mountains. The park harbors 19 species of the special Albertine rift endemics as well as a number of other species like the Rwenzori Turacos and the Shelley’s Crimson and brown-sheeted Lapwings, Papyrus Gonolek and Caruthers’s Cisticola. The Margherita peak, which can be seen from many miles away coupled with the Montane and bamboo forest on the lower slopes, the heath and the Afro-alpine Mooreland make for such an amazing display that only gets better the higher you go.

The Rwenzori Turaco is seen more easily here than in most of the other parks that host this rare bird once you reach the tree line at 3000m. The Greater double-collered sunbird which is reportedly endemic to the Rwenzori Mountains is fairly common in the Bamboo and heath areas of the lower slopes. Another rarity found in this spot of paradise is the African long-eared owl believed to occur only in this park and the mountain Kenya area. Other Birds include Albertine rift Endemics like the Handsome Francolin, Rwenzori nightjar, Rwenzori Batis and the strange weaver among others are commonly sighted. Other bird species that are likely to be seen include the Western green tinker bird, olive woodpecker, Golden-winged sunbird, bamboo warbler and the Montane sooty boubou.

The special highlight of this national park though is the 7 day trail around the Rwenzori Mountains that unveils the magical conditions that make this one of the most amazing spots on this globe. Despite lots of effort, cold weather and mud, the trail reveals enchanting scenes at are unforgettable like some of the plant life that cannot be found anywhere else except in high altitude tropical African mountains like the Giant Lobelia. Along the trail, several strategically placed huts are there for the comfort of the average visitor.

Probably the most rewarding scenes are around the Bukuju hut (at 13,000 ft.) which is surrounded by the imposing Mt Stanley to the West, Mt baker to the South and Mt Speke to the north with the picturesque Bukuju Lake just a stones throw away. This is also a good launch pad for people who are fanatical enough to climb to the highest peak on Mt Stanley (It takes a lot of physical and mental energy as well as technical skill and special equipment to accomplish this massive task).

As you proceed along the steep Scott Elliot pass that leads to the Elena hut. You cannot afford to miss the beautiful moss Groundsel vegetation at an altitude of 14,700 ft. Note that such high altitudes come with their disadvantages and complications.

Conditions such as “Altitude sickness” usually affect inexperienced hikers. In more severe cases, Hypothermia may occur mostly in poor weather. The park does not offer so much in terms of animal life. However, you may see quite a few high altitude dwellers. In addition, the Red Duiker and rock hyraxes are usually in sight along the trail.

Most accommodation is in the nearest major towns to the park (Fort Portal and Kasese). The accommodation ranges from luxury hotels to basic lodges.

However, when up in the mountains, the only available accommodation is the 18 huts (along the trails). Also, you have to carry your own food. Alternatively, the Rwenzori Mountaineering services or RMS at Nyakalengija can provide you with utensils for cooking cook.

Porters are also available for hire to carry all you heavy baggage. The huts can only accommodate 15 people a night so your trip might delay. You can get there by road or by air. The drive from Kampala through fort portal to Kasese is about 75 km. Thereafter, an additional 25 km will get you to the park gates. Alternatively, you can charter a plane from Entebbe to Kasese. Then, you can proceed by road to the Rwenzori mountains national park.

Usually, the culprit is bad weather but the high altitudes also sometimes play a part.

The huts can only accommodate 15 people a night and this might inconvenience your schedule. We strongly recommend that you book in advance to avoid disappointment.

Like with all National parks, littering is illegal so as to keep the park as natural as possible. You should collect tins, plastics and silver foils after use and take them out of the park.