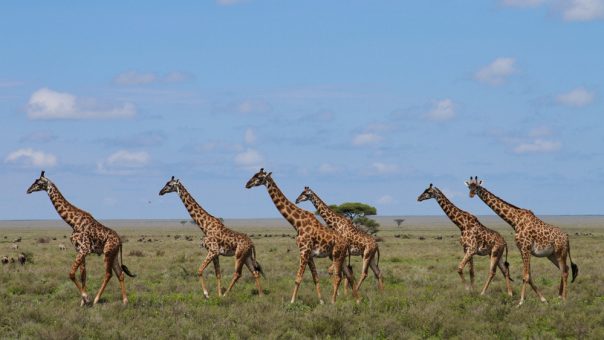 The Akagera National Park is located in the Eastern part of Rwanda along the Tanzania border. It is a protected park covering over 433sq.miles.

The Park was gets its name from the Akagera River which flows along the Eastern boundary pouring its water into Lake Ihema and several other small lakes. This park comprises savannah and swamp habitats. Almost a third of this park is lakes and linking papyrus swamps which makes it the largest protected wetland in East-Central Africa.

The Park was a great habitat for many animals including the black rhinos (from Tanzania). Additionally, Masai giraffes were an addition from Kenya in 1986. Also, there were over 300 lions and a large population of African wild dogs. However, these dogs later diminished by a disease pandemic in 1984.

The outbreak of 1994 Rwanda Genocide was also a great blow to the Akagera National Park as its known large diversity perished. Unfortunately, the park lost the entire animal population due to poaching. This was because the Rwanda returnees that had fled to the neighboring countries were looking for settlement.

The Akagera National Park became history. However, in 2009, there was an agreement between the Rwanda Development with the African Parks Network for joint management of this Park. In addition, there was an increase in security and re-introduction of locally extinct animal species.

There was construction of the Western boundary fence (about 120km (74.6miles)) for tight security of the park. Additionally, there was deploying of an air surveillance helicopter and training of an expert rhino tracking. A protection team and canine anti-poaching unit were deployed all in the favor of the park.

Introduction of animals in the park

The park re-existed more as 7 lions were introduced and released into the park from South Africa and these became the first lions in Rwanda since the 1994 Rwanda Genocide. But as you read this now, the park now has over 40 lions and still multiplying.

In 2019, Akagera National Park furthermore received 5 eastern black Rhinoceros from 3 different zoos. These were the Dvurkravole zoo from the Czech Republic, Flamingo Land from the UK, and the Ree Park Safari from Denmark.

How to reach Akagera National Park

Going to the park is very easy. Fly to Kigali International Airport and Akagera Aviation is readily available with flights from and to the Park.

Safari vehicles are also available and it’s only a 3hour drive from Kigali city to the Park.

When to visit Akagera National Park?

East Africa has got the most favorable weather conditions. Both the dry and wet yearly seasons are moderate in Rwanda. Therefore you can travel at any time of the year.

Pamoja Tours and Travel, always at your service!!!