Lake Mburo National Park : Though this is the smallest of Uganda’s savannah national parks, Lake Mburo is a very special and exciting place in its very own right. It is clear that the national park gets its name from Lake Mburo which is found within its borders. The national park is illustrated by gentle sloped, rolling hills that are characteristic of the Ankole region in which the park is found and vast and beautiful papyrus swamps that border the shores of lake Mburo.

Lake Mburo mainly has a savannah type of vegetation with Acacia and Euphorbia trees dotting the entire expanse of the park, though some patches have taller mixed woodland and rocky ridges. Additionally, the papyrus endemics that populate the swamps that border the lake are a group of birds that you can only find in such habitats and the shores of Lake Mburo offer an excellent source for these birds. This park also offers a wide range of herbivorous animals and also some carnivores like Leopards, Hyenas and Jackals.

One of the main attractions is the extensive cross-section of herbivorous species that wander and graze the savannah grasslands and can easily be spotted along the road from the Nshara gate to the park headquarters and the numerous trails that network the Park. Large herds of Eland, Bushbucks, Buffaloes, Zebras, Eland, Topi and Impalas can be seen frequently. It is important to note that this is the only park in Uganda where the Impala occurs. Also, you can’t miss the Hippos, Waterbucks and other semi aquatic animals that live on the shores of the Lake Mburo. 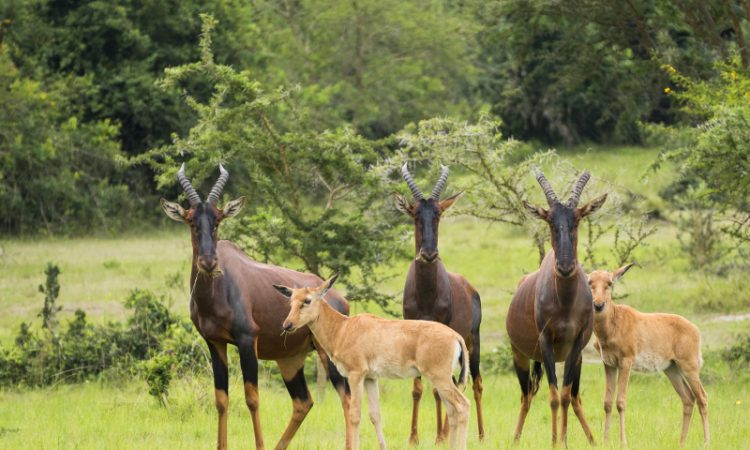 Other animals include the common Warthog, Dwarf Mongoose, White-tailed Mongoose, Marsh Mongoose, Clawless, Swamp and Spot necked Otters, striped Weasel, Jackals, Bush pig, spotted Hyenas, African Civet, Servals, Aardvark, Leopards, Crested Porcupine and the African wild cats among many others. You can see some of the more elusive Herbivores at close range from a platform near the ‘Salt lick’. At any given time of day, at least 4 different species are always enjoying salt at this location.

The papyrus endemics as mentioned earlier are a group of birds that live only in swampy habitats usually characterized by papyrus reed. With out doubt, the most famous and sought after of these birds is the magnificent shoebill, which is an endangered bird.

Other Papyrus endemics like the following are in the extensive Mazinga papyrus swamp bordering the shores of Lake Mburo;

In addition, one can do sport Fishing at the lake. However, if you want to take part, you should carry your own equipment (there are boats for hire). The main fish species are tilapia.

The undulating gentle sloped hills are the trademark of the Ankole Region. In addition, they give one a feeling of serenity and calmness. While there, you can see the intense blue of the lake that stands out against the backdrop of the lush green of the papyrus swamps. In some places the Savannah plains dotted with shrubs and acacia trees go on as far as the eye can see. This is frankly one of the most remarkably special places Uganda has to offer.

Need to say, this Special piece of Uganda is located only 3.5 hours away from the capital city, Kampala along the Masaka-Mbarara Highway. Turn left 13 kms after Lyantonde town. Then, a further 8 kms off the highway will get you to the Nshara gate. Alternatively, you can access the Sanga gate from the Sanga trading center. Both junctions have clear markings and it takes 20 minutes to the park Headquarters.

The accommodation offered like most National parks in Uganda range from Luxury lodges to campsites. The luxurious Lodges include the Mantana Tented camp and the Kachira tented camp overlooking Lake Mburo. For more reasonably priced accommodation, the park offers Bandas and a campsite at Rwonyo. There is also another campsite near the Nshara gate.

Some of Uganda safaris