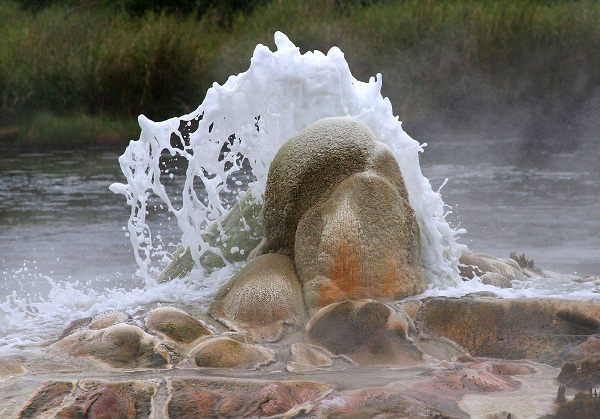 Situated in the remote Bundibugyo area immediately north of the Rwenzori mountains, Semuliki National Park makes the Eastern part of the extensive Ituri rain forests of the DRC. Situated on the Western Uganda-DRC border, Semuliki national park gets its name from the meandering river Semuliki that lies exactly at the border.

Since Semuliki national park is the only lowland tropical rain forest in East Africa, it has a very wide range of tree species some of which cannot be found anywhere else in East Africa apart from one or two adjacent forests. 24 of the 336 recorded species are specific to these forests and a few are considered to be in danger of extinction.

Semuliki is also is one of the richest places to bird. It boasts of 435 species of birds some of which cannot be found anywhere else in East Africa. It also accommodates some of the continents sought after birds like the Black wattled hornbill and the Congo Serpent Eagle. The enchanting tropical rainforest, the Meandering Semuliki river and the extensive hot spring system make Semuliki National park one of the most delightfully charming places to visit.

A number of primate species also live in this National Park. To sum it up, Semuliki is one of the parks you can’t afford to leave out of your visit.

Semuliki possesses 63 mammal species a number of which are primates. Nocturnal primates like Pottos and Galagos are especially hard to see while the more conspicuous primates like the Grey Cheeked Mangabeys, Red-tailed, Vervet and Blue (Gentle) monkeys, Olive Baboons and Guerera Colobus among others flourish. Surprisingly the Chimps and the De Brazza’s monkey are rare.

The Red Colobus is practically extinct in this region although some individuals can be seen associating with groups of the Guereza Colobus. The other mammals like the forest Elephants, Bush Pig, Water Chevrotain, Forest Buffalo, Sitatunga, Dwarf Antelope, Zenkers flying Mouse, Beecrofts flying and Pygmy Squirrels are quite hard to see primarily because of the extensive forest cover and the flooding conditions during the rainy seasons (floods are caused by poor drainage and the fact that all rivers and streams in this area drain into the lowland forest).

There are 374 butterfly and Moth species in this rainforest. These include 46 species of forest Swallowtails and Charaxes and 81 species of Giant Moths, 12 of which are unique to Semuliki national park.

The impressive bird list of 435 species is richly gratifying for any birder. These include some of Africa’s most popular birds and a group of central African bird species that are unique to the park.

There are several hornbills in this tropical rain forest with an incredible 8 species. For instance;

Other birds of interest are the Crowned Eagle, Great blue and Ross’s Turacos, Black-collered lovebird, Forest Francolin, Spot-breasted Ibis, Red-rumped Tinkerbird, White-bellied and African Dwarf kingfishers among so many more. See the Bird Species page for a more complete list. So far, there is a history of low exploration in this rain forest, making it a possibility that there are some birds missing on the bird list. Who knows, you could be the first to see a new bird in the Semuliki rainforest.

To say that Semuliki National park is beautiful is a gross understatement. This magical Rainforest is too captivating for words. The vast low-lying Tropical rainforest goes on until it meets the horizon when seen from the higher placed edge. Most of the captivating tropical rain forest consists of thick, lush undergrowth, swamps and oxbow lakes/streams.

Two hot springs lie in one of the parks swamp lands. Here amazing sights of geysers that shoot up to heights of 2 metres and pools of boiling hot water that go up temperatures of 130 degrees centigrade are in clear view. You can actually boil your food in these “natural boilers”. A trip to the spectacular snaking Semuliki River through a trail in the jungle is a must if you visit this National Park.

The accommodation at the park consists of two basic camps and preparation of meals is on order. More comfortable and up market accommodation is in Fort portal and Bundibugyo. You can get to Semuliki national park by road only and it there are 2 main ways. The shorter route to Fort Portal is via Mubende. It takes 2 to 3 hours over a distance of 300 kms. Then, you travel another 2 hours of rough murram road to the Sempaya gate.

The better alternative though is the longer route that passes via Masaka, Mbarara and Kasese and takes approximately 7 to 9 hours over a distance of 510 kms because it gives you the opportunity to visit a number of our National park in the Western circuit like Queen Elizabeth, Lake Mburo and Rwenzori mountains national parks.