What is Ebola Virus Disease?

Ebola virus disease is a deadly disease with occasional outbreaks that occur mostly on the African continent. The disease mostly affects people and nonhuman primates (such as monkeys, gorillas, and chimpanzees).

It is caused by an infection with a group of viruses within the genus Ebolavirus:

History about the Ebola Virus Disease

Of all the stains, only four (Ebola, Sudan, Taï Forest, and Bundibugyo viruses) have caused disease in people. Reston virus can cause disease in nonhuman primates and pigs, but there have not been cases in people. Bombali virus was first identified in bats in 2018, and experts do not know yet if it causes disease in either animals or people.

Ebola virus was first discovered in 1976 near the Ebola River in the Democratic Republic of Congo. Since then, the virus has been infecting people from time to time, leading to outbreaks in several African countries. Scientists do not know where Ebola virus comes from. Based on similar viruses, they believe that Ebola is animal-borne, with bats or nonhuman primates being the most likely source. Infected animals carrying the virus can transmit it to other animals, like apes, monkeys, duikers and humans.

Transmission of the disease 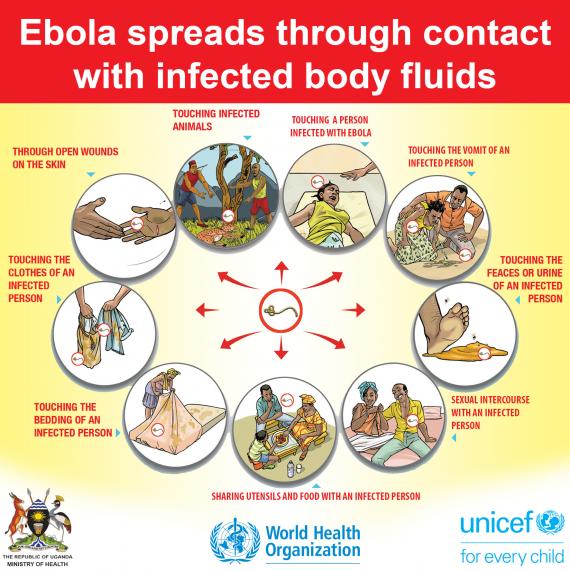 The virus first spreads to people through direct contact with the blood, body fluids and tissues of infected animals. Ebola virus then spreads to other people through direct contact with body fluids of a person who is sick with or has died from Ebola. The virus gets into the body through broken skin or mucous membranes in the eyes, nose, or mouth. People can also get the virus through sexual contact with someone who is sick with or has recovered from the disease. It is also important to note that the virus can persist in certain body fluids, like semen, after recovery from the illness.

Side effects after recovery

Ebola survivors may experience side effects after their recovery. These may include tiredness, muscle aches, eye and vision problems and stomach pain

The Ebola virus can spread through;

-Blood or body fluids (urine, saliva, sweat, faeces, vomit, breast milk, amniotic fluid, and semen) of a person who is sick with or has died from Ebola virus disease.

-Objects (such as clothes, bedding, needles, and medical equipment) contaminated with body fluids from a person who is sick with or has died from Ebola.

-Infected fruit bats or non-human primates (such as apes and monkeys).

When people become infected with Ebola, they do not start developing signs or symptoms right away. This period between exposure to an illness and having symptoms is the incubation period. A person can only spread Ebola to other people after they develop signs and symptoms of Ebola.

There is no evidence that mosquitoes or other insects can transmit Ebola virus.

2.Avoid contact with semen from a man who has recovered from the Ebola Virus Disease, until testing shows that the virus is gone from his semen.

3.Avoid contact with items that may have come in contact with an infected person’s blood or body fluids (such as clothes, bedding, needles, and medical equipment).

4.Avoid funeral or burial practices that involve touching the body of someone who died from Ebola.

5.Avoid contact with bats, forest antelopes, and nonhuman primates (such as monkeys and chimpanzees) blood, fluids, or raw meat prepared from these or unknown animals (bushmeat).

The risk associated with Ebola

Ebola poses little risk to travelers or the general public who have not cared for or been in close contact (within 3 feet or 1 meter) with someone sick with Ebola.

Persistence of the virus

The virus can remain in areas of the body that are immunologically privileged sites after acute infection. These are sites where viruses and pathogens, like the Ebola virus, are shielded from the survivor’s immune system, even after being cleared elsewhere in the body. These areas include the testes, interior of the eyes, placenta, and central nervous system, particularly the cerebrospinal fluid. Whether the virus is present in these body parts and for how long varies by survivor. Scientists are now studying how long the virus stays in these body fluids among Ebola survivors.

During an Ebola outbreak, the virus can spread quickly within healthcare settings (such as clinics or hospitals). Clinicians and other healthcare personnel providing care should use dedicated, preferably disposable, medical equipment. Proper cleaning and disposal of instruments such as needles and syringes are important. If instruments are not disposable, clinicians must sterilize them before reuse.

Survival period for the virus on surfaces and in the body

Ebola virus can survive on dry surfaces, like doorknobs and countertops for several hours; in body fluids like blood, the virus can survive up to several days at room temperature. Health workers should use a hospital-grade disinfectant for cleaning and disinfection.

Symptoms may appear anywhere from 2 to 21 days after contact with the virus, with an average of 8 to 10 days. The course of the illness typically progresses from “dry” symptoms initially (such as fever, aches and pains, and fatigue), and then progresses to “wet” symptoms (such as diarrhea and vomiting) as the person becomes sicker.

Primary signs and symptoms of Ebola often include some or several of the following:

-Aches and pains, such as severe headache and muscle and joint pain

-Other symptoms may include red eyes, skin rash, and hiccups (late-stage).

Treatment and recovery of Ebola

EVD is a rare but severe and often deadly disease. Recovery from the disease depends on good supportive clinical care and the patient’s immune response. Studies show that survivors of Ebola virus infection have antibodies (proteins made by the immune system that identify and neutralize invading viruses) that can be detected in the blood up to 10 years after recovery. Survivors are thought to have some protective immunity to the type of Ebola that sickened them.

Pamoja Tours and Travel advises on how to protect yourself from Ebola during a safari.

Diagnosing Ebola virus disease shortly after infection can be difficult. Early symptoms of EVD such as fever, headache, and weakness are not specific to Ebola virus infection and often are seen in patients with other more common diseases, like malaria and typhoid fever.

To determine whether Ebola Virus Disease is a possible diagnosis, there must be a combination of symptoms suggestive of the disease and a possible exposure within 21 days before the onset of symptoms.

If a person shows signs of EVD and has had a possible exposure, he or she should be isolated (separated from other people) and public health authorities notified. Blood samples from the patient should be collected and tested to confirm infection. Ebola virus can be detected in blood after onset of symptoms. It may take up to three days after symptoms start for the virus to reach detectable levels.

Use of a PCR test to detect the Ebola Virus

Polymerase chain reaction (PCR) is one of the most common diagnostic methods because of its ability to detect low levels of Ebola virus. PCR methods can detect the presence of a few virus particles in small amounts of blood, but the ability to detect the virus increases as the amount of virus increases during an active infection. When the virus is no longer present in great enough numbers in a patient’s blood, PCR methods will no longer be effective. Other methods, based on the detection of antibodies an EVD case produces to an infection, can then be used to confirm a patient’s exposure and infection by Ebola virus.

There are currently two treatments approved by the U.S. Food and Drug Administration (FDA) to treat EVD caused by the Ebola virus, species Zaire ebolavirus, in adults and children. The first drug approved in October 2020, Inmazeb, is a combination of three monoclonal antibodies. The second drug, Ebanga, is a single monoclonal antibody and was approved in December 2020. Monoclonal antibodies (often abbreviated as mAbs) are proteins produced in a lab or other manufacturing facility that act like natural antibodies to stop a germ such as a virus from replicating after it has infected a person. These particular mAbs bind to a portion of the Ebola virus’s surface called the glycoprotein, which prevents the virus from entering a person’s cells.

Both of these treatments, along with two others, were evaluated in a randomized controlled trial during the 2018-2020 Ebola outbreak in the Democratic Republic of the Congo. Overall survival was much higher for patients receiving either of the two treatments that are now approved by the FDA. Neither Inmazeb nor Ebanga have been evaluated for efficacy against species other than Zaire ebolavirus.

Whether or not other treatments are available, basic interventions can significantly improve chances of survival when provided early. These are supportive care methods and they include:

-Providing fluids and electrolytes (body salts) orally or through infusion into the vein (intravenously).

-Using medication to support blood pressure, reduce vomiting and diarrhea, and to manage fever and pain.

-Treating other infections, if they occur.

Pamoja Tours and Travel highly prioritizes the health, safety and well being of all our clients. With that, we have put in place all the necessary precautions to ensure that our clients have a comfortable and safe safari experience.

Additionally, the Government of Uganda has got the Ebola situation under control. There are no travel restrictions and tourism is going on as it has always been. Feel free to contact us for any further information and to place your safari bookings with us.