Voyager Ziwani is today famous for being in ‘big game country’ that is one of the biggest national parks in the world, Tsavo West. 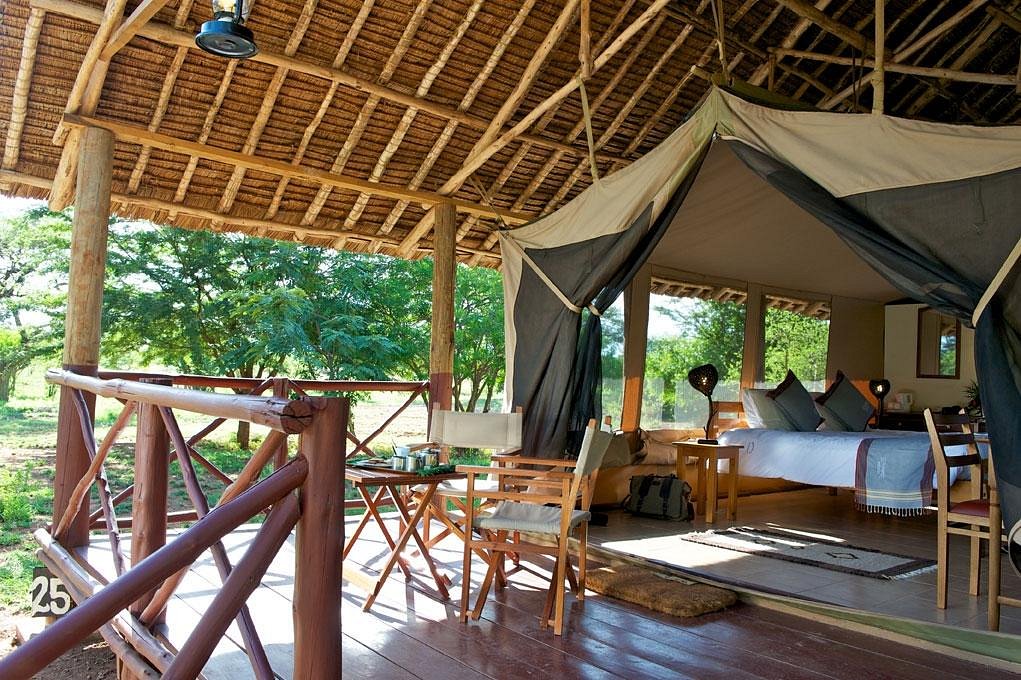 To begin with, the Tented camp is a Mid-range accommodation in Tsavo west national park situated in the shadow of Mount Kilimanjaro, on the edge of one of Kenya’s least explored parks. Located on 30,000-acre private farm on the western edge of Tsavo West National Park, the camp sits on the edge of a small secluded dam on the Sante River. Furthermore, its environs are home to hundreds of basking hippos, while a short drive will deposit you among the big game of one of Kenya’s wildest national parks. 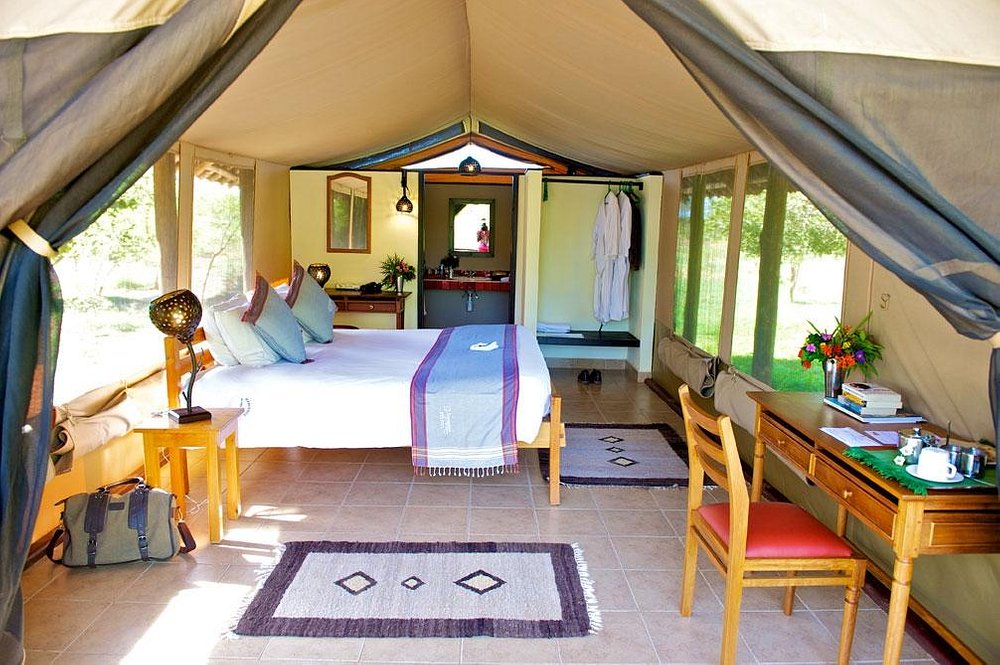 Filled with a rich tapestry of volcanic upheavals like the Roaring Rocks and the volcanic rubble heap that is Chaimu, the land is as diverse as its wildlife – the red elephants of Tsavo and descendents of the infamous man-eating lions share the savanna grasslands with the Fringe-eared orxy of the thorn filled scrub while the crocodiles and hippos while away time in the cool waters of the crystal clear Mzima springs and the rivers that course through.

Built in 1969, the Ngulia Safari Lodge stands within the Tsavo West National Park, on the Ndawe Escarpment overlooking the Ngulia Rhino Sanctuary. Tsavo lies some 232 kms from Nairobi and can be reached by road or air (three air strips). 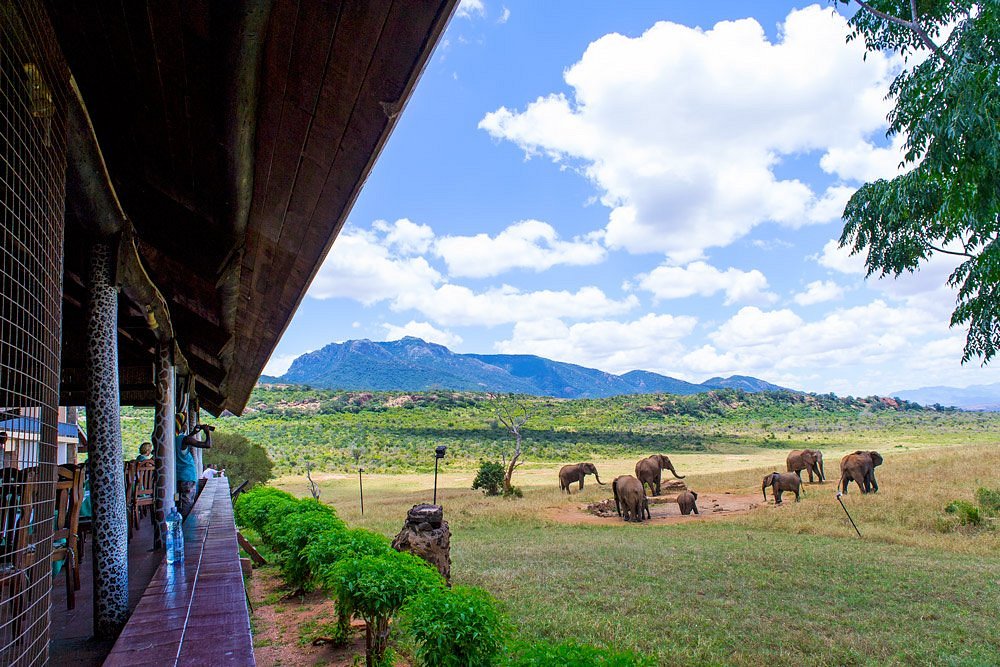 The Lodge has 52 standard rooms, all with bath and shower and a balcony with a view of the wilderness and floodlit water holes. 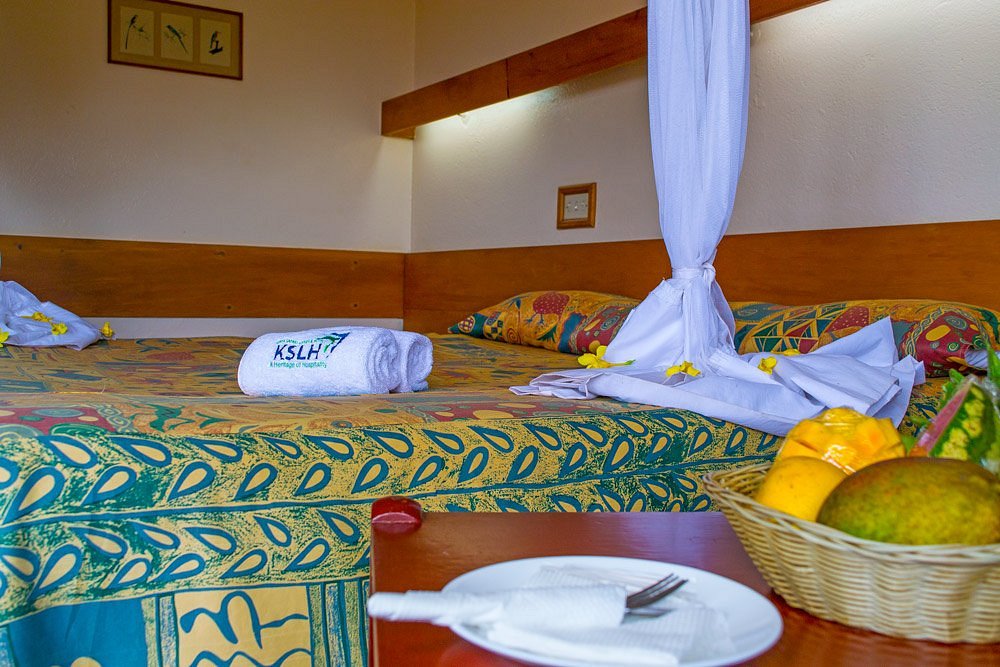 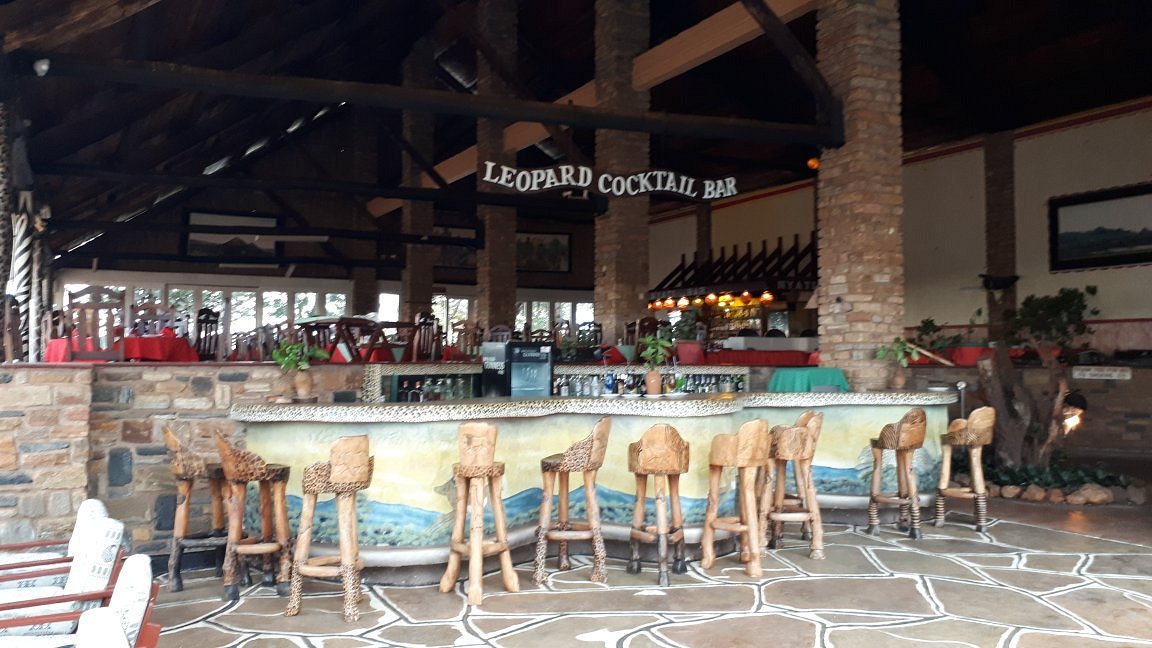 Experience the real safari – morning and afternoon game drives through the park with our trained driver-guides. Picnic lunches and sundowners can be provided. Tsavo offers some of the most magnificent game viewing in the world – vast herds of dust-red elephant, fat pods of hippo, giant crocodile, teeming herds of plains game, a fantasia of bird life and some magical flora. All walks accompanied by Kenya Wildlife Service armed rangers.

Visits to the magic of Mzima Springs

The lush, hippo-inhabited pools of Mzima Springs, fed daily by 250 million litres of water gushing from the lava flows of the Chyulu hills, provide an oasis of green, an Under-water hippo-viewing chamber, two nature trails and some unique picnic spots.

30 km from Mzima Springs, along a well-marked track, is the Ngulia escarpment, (upon which stands Ngulia Lodge). Behind it rear the jagged peaks of the Ngulia Hills, a range of sheer cliffs that rise out of the plains, 610m below, to a height of 1825 m above sea level. Not only do the Ngulia hills offer magnificent vistas over the volcanic shoals of Tsavo but also, every year between late September and November, the adjacent Ngulia Bird-ringing Station plays host to one of the greatest avian spectacles in the world.

In the 1960’s Tsavo had the largest population of black rhinos in Africa (between 6,000 and 9,000) and they were a common sighted within the park. By 1981, however, Tsavo’s rhino had been poached to the brink of extinction and only 100 animals remained. Today most of Tsavo’s surviving rhino, plus numbers of re-located animals have been moved to the Ngulia Rhino Sanctuary, close to the Ngulia Lodge where a meter-high electric fence surrounds an area of 70 sq. km now designated an official sanctuary for approximately 40 rhinos. The Sanctuary also offers shelter to a broad range of other threatened wildlife to include cheetah and leopard and the rare frog (Afrixalus pygmaeus septentrionalis), which occurs only in the area between Mtito Andei and Voi.

Climbing and trekking in the Ngulia Hills

There are some good technical climbing routes around the Ngulia Hills, the most popular of which is Kichwa Tembo (the elephant’s head). We can also arrange some rewarding trekking for you.

Kipalo camp is a lodge on a 12,000 acre piece of land in a conservancy bordering the Tsavo West National Park.

The lodge sits on the Mbulia Hills and offers a panoramic view of the Tsavo West National park while the Kilimanjaro offers a spectacular backdrop of the beautiful scenery around it. Kipalo means “a special place where one returns to again and again” in the Taita language. Kipalo camp’s main mission is to support the local community and 12,000 conservation area through a tourism initiative. To protect and provide a safe haven for the resident wildlife including over 700 elephant during the dry season

Accommodation at Kipalo camp is in luxurious tents that are en suite with hot showers throughout the day.

The rooms have double beds and are adjustable into twin rooms. All rooms offer the most luxurious comfort. Meals are available at the lounge mess or dining area with a wide variety of cuisines. Additionally, we can arrange Bush dinners and sun downers to offer a more intimate experience with nature. Also, after game drives or nature walks on sunny afternoons guests can relax. Alternatively, they take a deep in the pool which overlooks the expansive conservancy. 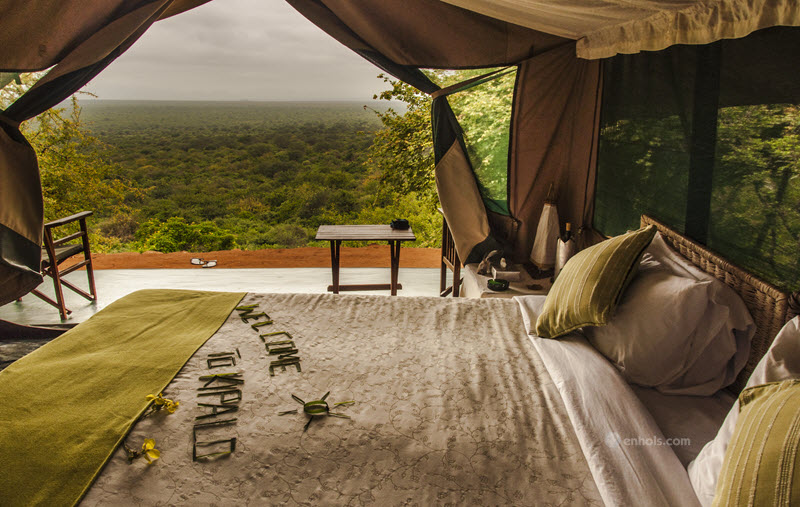 Lions bluff is a Mid-range accommodation in Tsavo west national park located in the Lumo community wildlife sanctuary, between Tsavo West National Park at the coast 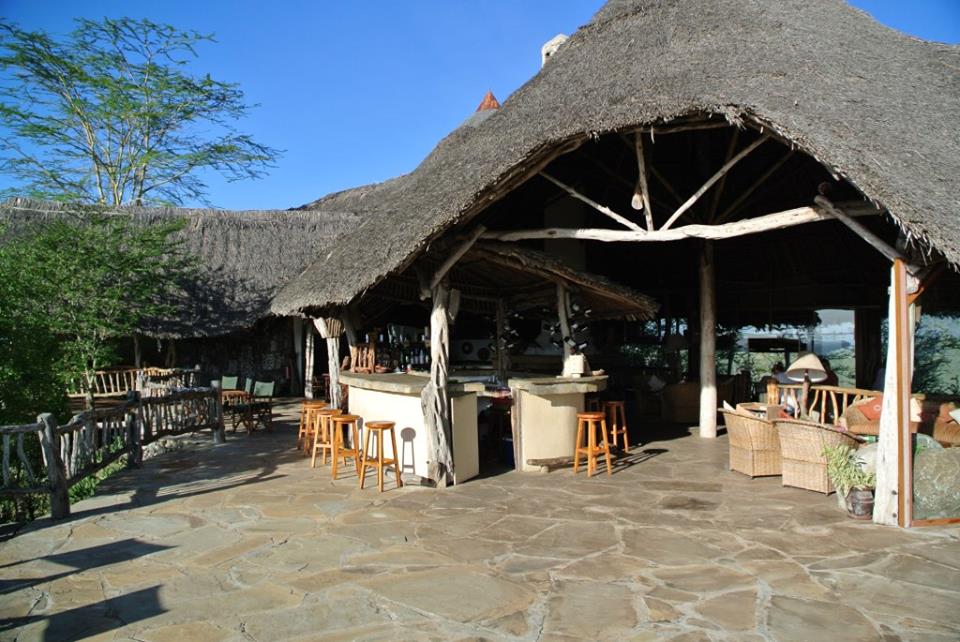 Lion bluff is an intimate and beautifully designed  mid-range safari lodge made of sustainable timber canvas and traditional coconut thatch and has an open terrace with magnificent views of Mount Kilimanjaro, stunning panoramic views over the golden green Tsavo Savanna and the Taita hills. The lodge offers day or night game drives and bush walks where you can spot;

Lions bluff lodge has 14 traditionally-built en suite bandas. Additionally, these have individual terraces that provides outstanding views of the plains below and Mt. Kilimanjaro. 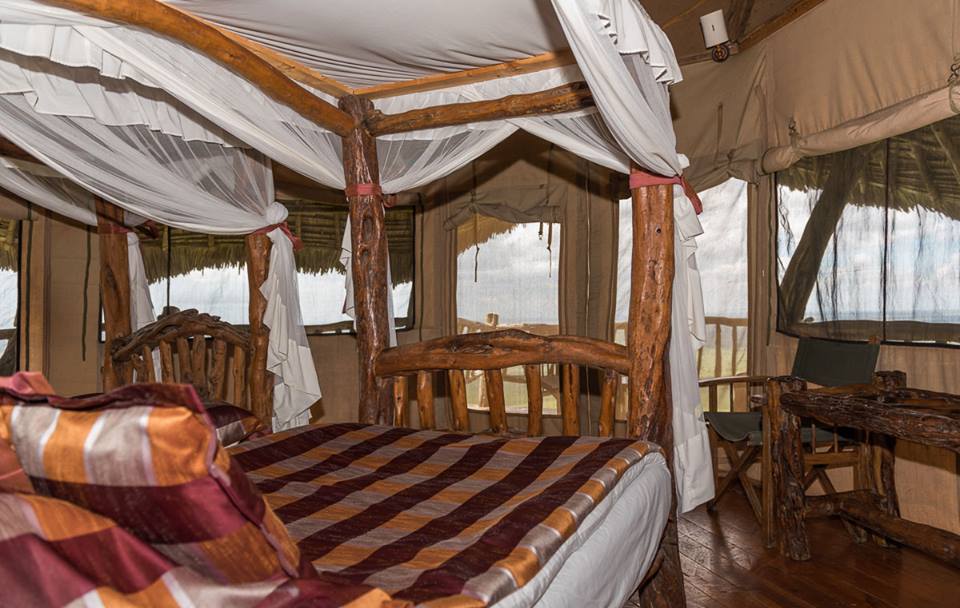 Each room has either double or twin beds and one family unit. For the more adventurous tourists, Lions Bluff has a campsite. The Cheetah campsite which has;

Campers can also access the lodge’s stunning  dining area that overlooks an ancient elephant migratory corridor. Additionally, you can view the small waterhole visited by herds of elephants among other animals. You can enjoy all this while having your meals. Also, there is a restaurant that caters to all food preferences and a free parking area.