The Great Wildebeest Migration is the largest herd movement of animals on the planet.

It is important to acknowledge that migration occurs among both human beings and animals.

Migration, in zoology terms, refers to the seasonal movement of animals from one region to another. More to that, the main reason for migration among animals is the search for pasture and water.

What the migration involves:

Interestingly, this migration involves the movement of 1000 animals per square kilometer with the wildebeests totaling to 1.2 million and the other animals (companions) such as zebras and gazelles totaling to about 300000. Did you know that this exodus can even be viewed from space? There are many more astonishing facts about this migration that will be revealed as we go on.

A summary of the wildebeest’s profile

To begin with, wildebeests are antelopes that belong to the genus Connochaetes and are native to Eastern and Southern Africa. These animals further belong to the Bovidae family which is constituted of other animals such as cattle, sheeps and goats. Wildebeests are mammals and thus feed their young ones on milk that is produced by their mammary glands. More importantly, Wildebeest is an Afrikaans name from South Africa that means “wild beast”.

With regard to physical appearance, these animals look like thin muscular cows with large, sloping backs, stripped bodies, short broad heads, manes, bushy beards and curved horns. In line with all the foregoing, wildebeests not only feed on grass but also eat succulent plants and karoo bushes. It has also been documented that they start grazing shortly after the sun rises, take a break at around midday, and then continue grazing until the sun sets. In addition, wildebeests take water almost every day and they sleep for only 4 and a half hours per day.

It is also worth noting that wildebeests are intelligent animals. This is portrayed by the fact that they execute certain tactics to protect them from being attacked, for example while some of them take a nap, others keep watch for potential predators. More to that, these animals are always on the move and never stay in one place for too long.

Wildebeests have a life expectancy of 20 years in the wild. The young ones (calves) are usually born in February and March every year, at the beginning of the rainy season. The number of calves born annually totals up to 500000. Surprisingly, these calves learn how to walk within the first minutes of birth and within a few days, they can keep up with the herd while moving alongside their mothers. 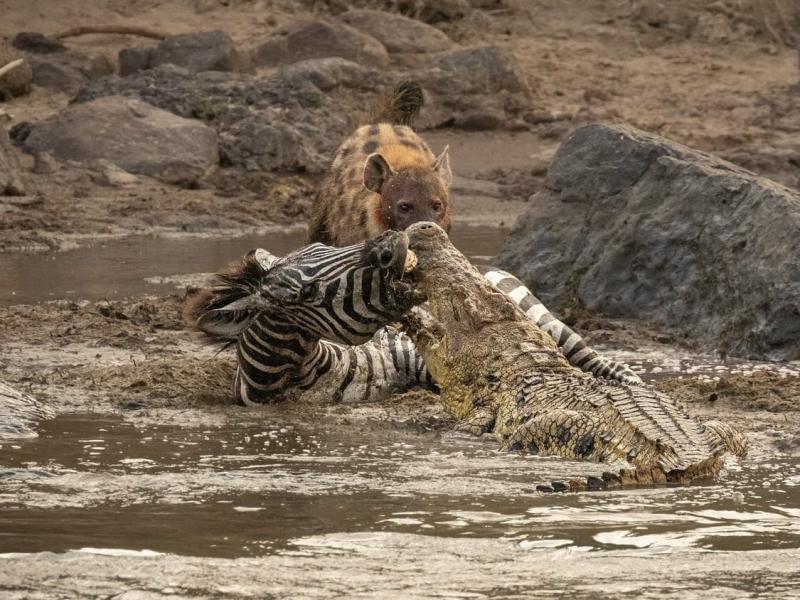 Death Roll Mara River: Nile crocodile taking on a kill while hyena negotiating a share of the zebra

As earlier mentioned, we find wildebeests in Eastern and Southern Africa; from Kenya to Namibia. They prefer to live in savannahs and plains but they can also be found in dense bushes and open woodland flood plains. These creatures have their largest populations in the Serengeti National Park in Tanzania and Kenya. This is majorly because of the plains therein that have pastures with the highest protein and calcium content.

There are some habits that are unique to only gnu herds such as being active during both night and day and on a constant search for food and water. They also communicate through sight, smell and making extremely loud noises. That said, during the mating season, males do not sleep or eat in the presence of sexually active females. 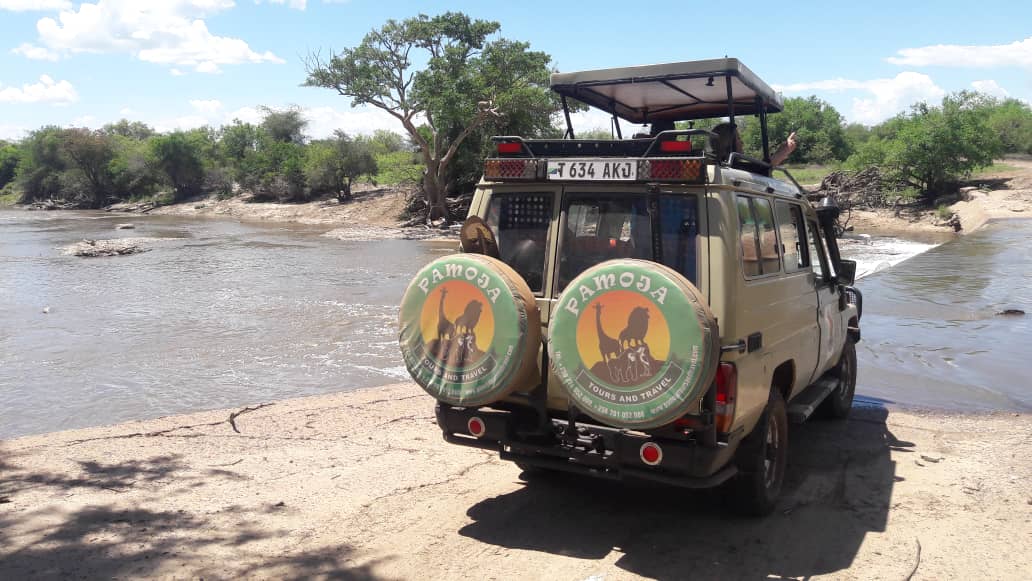 Our clients witness the migration 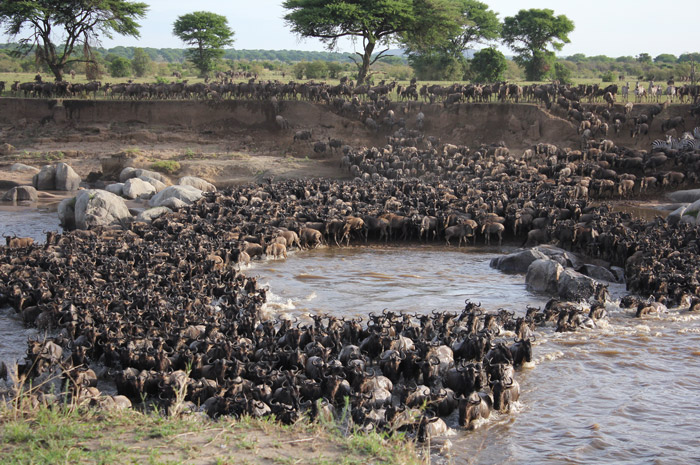 Holding the status of being one of the most desired experiences for wildlife fanatics, the great migration is defined as the continuous circular movement of over a million animals across the Serengeti-Mara eco-system. This constant movement involves not only wildebeests but other animals known as companions such as zebras and gazelles. Together, these animals follow an ancient route in search of nutritious pasture and water.

During this journey, each wildebeest can cover about 800 to 1000 kilometers along the migration routes with the guidance of its survival instinct. It is often wondered how the wildebeests are able to know the directions to take during the migration but it is believed that they follow the rains as well as the growth of new grass. Actually, scientists contend that wildebeests can detect rains from more than 50 kilometers away. Other people believe that these creatures respond to thunderstorms and lightning as seen from a distance.

The greatest show on earth

Despite certain scenarios that occur along the way for instance; dropping of calves or the attempts to cross rivers in a bid to avoid predators, the migration is not affected and still takes place throughout the year.

In the course of the great migration, also referred to as “the greatest show on earth”, it is not all peaceful and safe for the migrating animals as predators such as crocodiles, lions, leopards and cheetahs ensure that only the fittest survive. They do this by eating thousands of them especially the young calves and the weak slow ones. Besides that challenge, some of the animals encounter broken legs as they climb the steep river slopes while the tired ones drown in the water. Two amazing facts about wildebeests concerning their movement include: their ability to swim and the fact that they can run at a speed of 80km/hr – which is really fast. 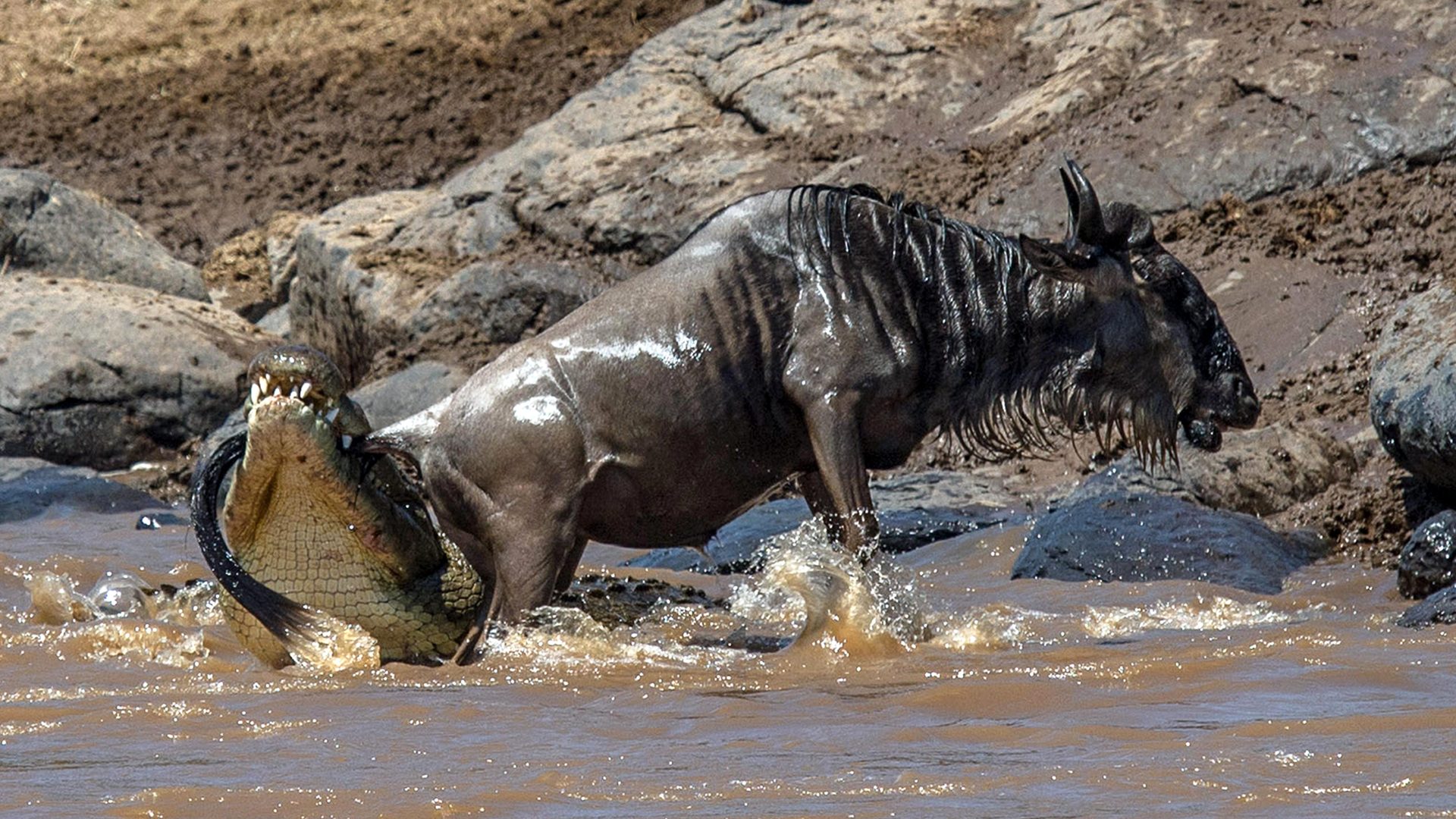 Furthermore, the thousands of animals that migrate split into subgroups called mega herds to ensure that there is enough food for the entire herd. The smaller sub herds follow a slightly different path while still moving in the same direction as the rest of the herd.

The course of the Great migration

The migration commences after the completion of calving in the Southern part of Tanzania’s Serengeti which is located near the Ngorongoro Conservation Area. The animals move from there and pass through Serengeti going up and around in a clockwise direction towards the Masai Mara in Kenya. Thereafter, they journey back to their original destination towards the end of the year. Along the way, as thousands of animals are eaten by predators, thousands more are born which replace the dead ones and this maintains the circle of life. This trend is the reason as to why wildebeests are not considered to be extinct or even in danger of getting extinct. 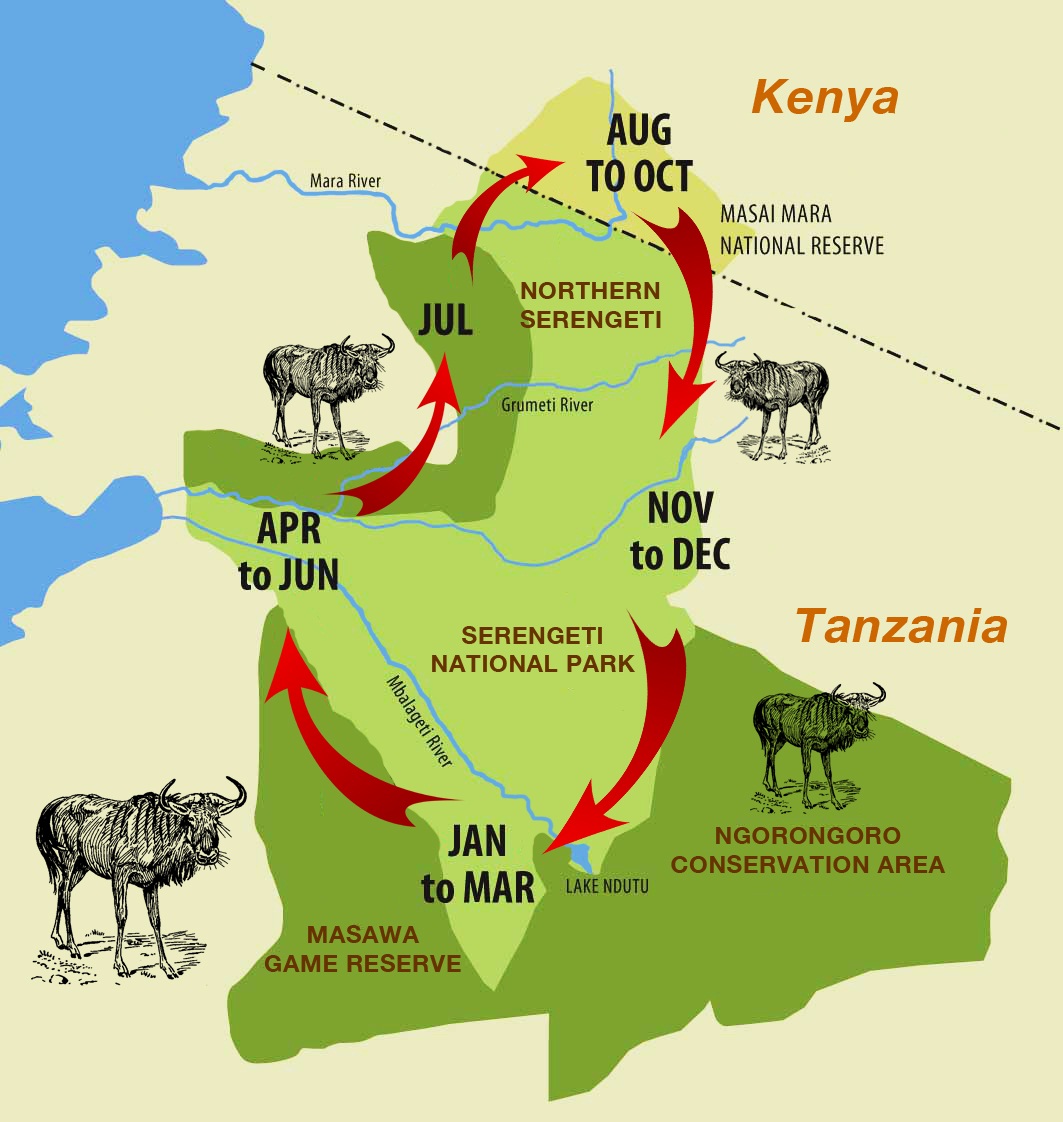 Every year, in around January, the migration will most likely be finishing a southward trek, moving into the Ngorongoro Conservation Area from the Eastern edge of the Serengeti. The plains in this area have plenty of nutritious grass which provides a suitable condition for the animals to raise their new born calves. Despite the fact that there is no actual beginning or end of the course, it seems appropriate to refer to the wildebeests’ birthing season as the start of the Great migration.

Towards the end of January or early February, the herds travel to the lower Northern slopes of the Ngorongoro Crater highlands and around Olduvai Gorge to occupy the short grass plains located there. Within a period of two to three weeks, about 400,000 calves are born and their large numbers attract many predators which hunt and feed on many of them. 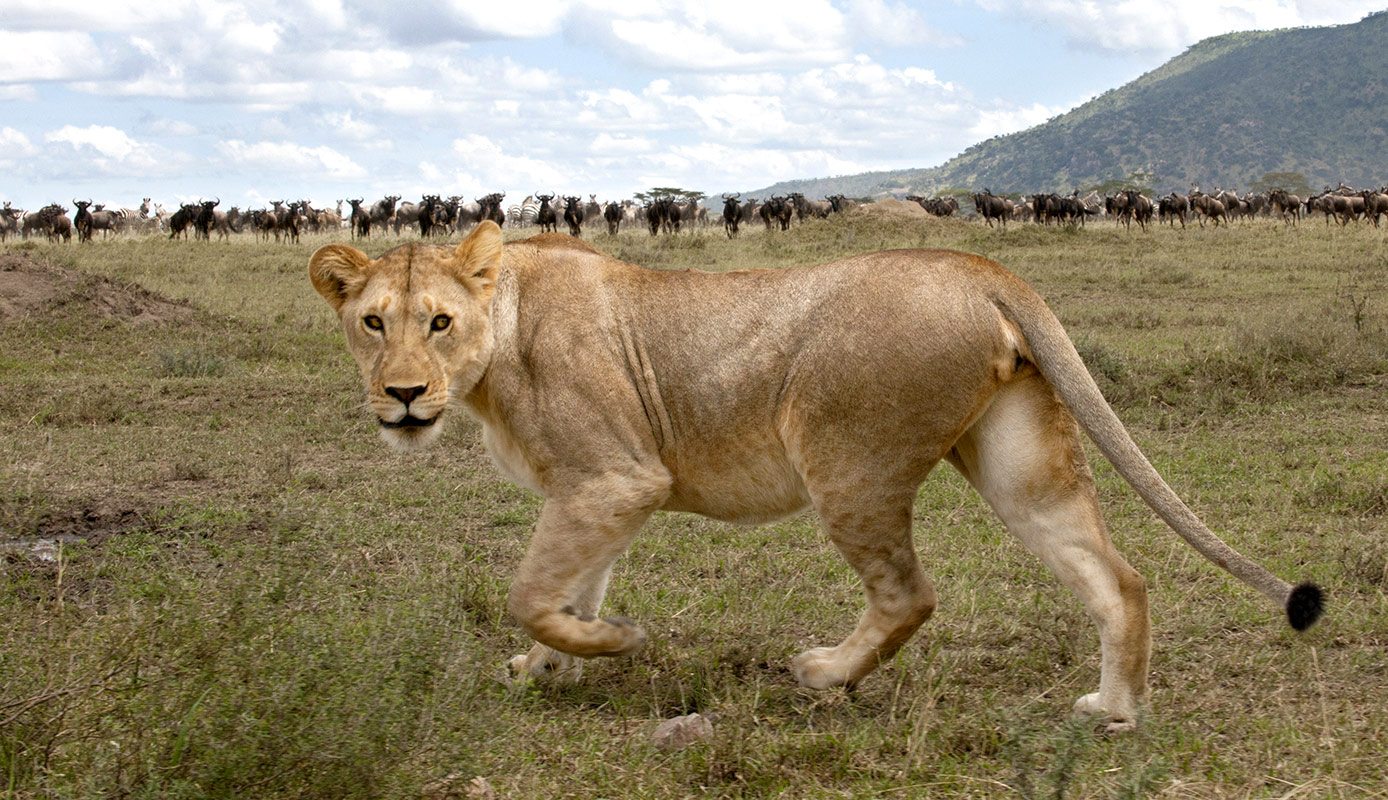 After the calving season, the wildebeests start travelling northwest towards the fresher grass of the Central Serengeti along with thousands of zebras and some antelopes. This movement takes place in April.

By the start of May, columns of wildebeests are seen covering several kilometers as they start to cluster by the Moro Kopjes and towards the end of the month, the mating season begins. The migration continues with the animals grazing as they embark on their journey.

The herds then gather momentum and start to move in the Serengeti’s Western Corridor. From this point, the animals are seen converging along the pools and channels of the Grumeti River. They do this in preparation for the extraordinary crossings. 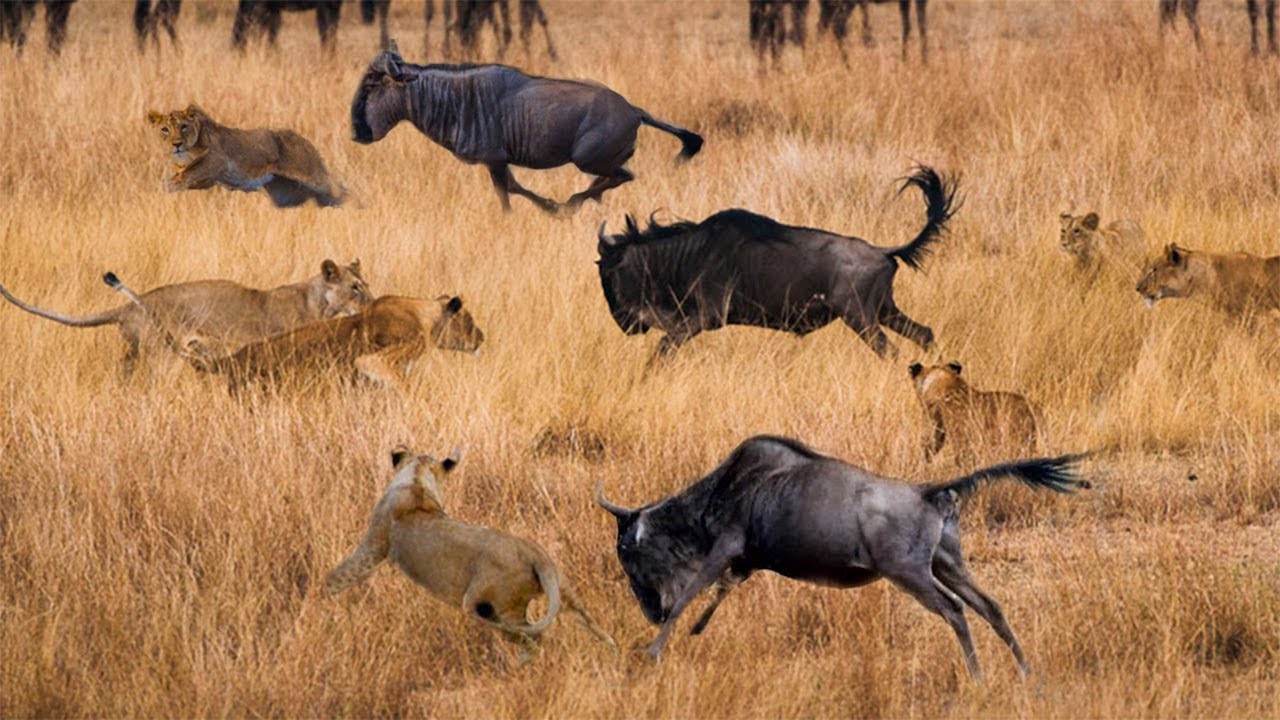 The dry season begins in the month of June. During that period, we see large groups of wildebeests on the Southern banks of the Grumeti River and in the Western Serengeti.

Between June and July, the migrants proceed to the north towards the Mara River in the North of Serengeti. The crossings, which are one of the most exciting wildlife events on Earth, begin in July. As the herds swim across, crocodiles and other predators eat some of them. The tired ones may drown. However, the strong ones are able to cross successfully to Masai Mara. 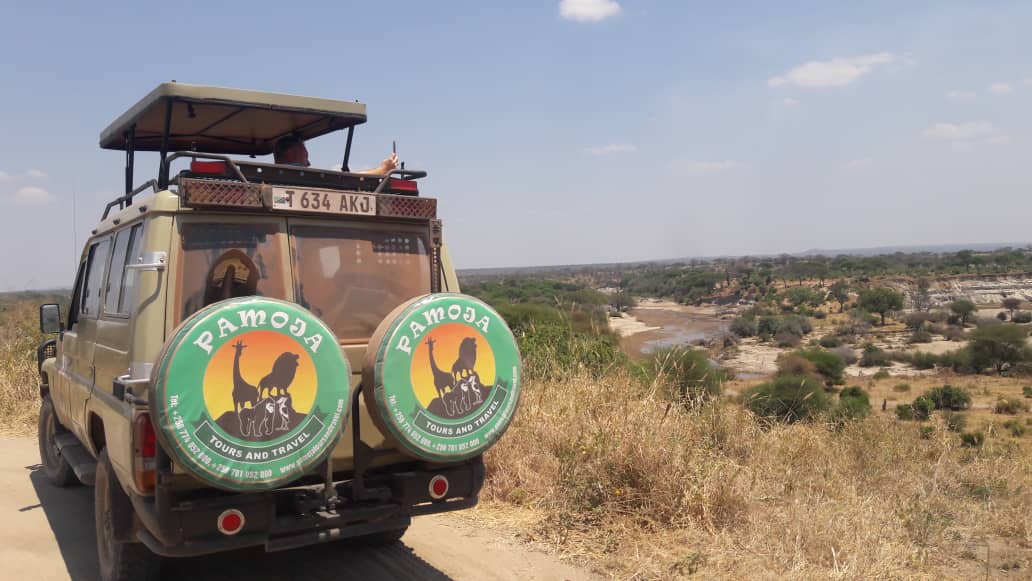 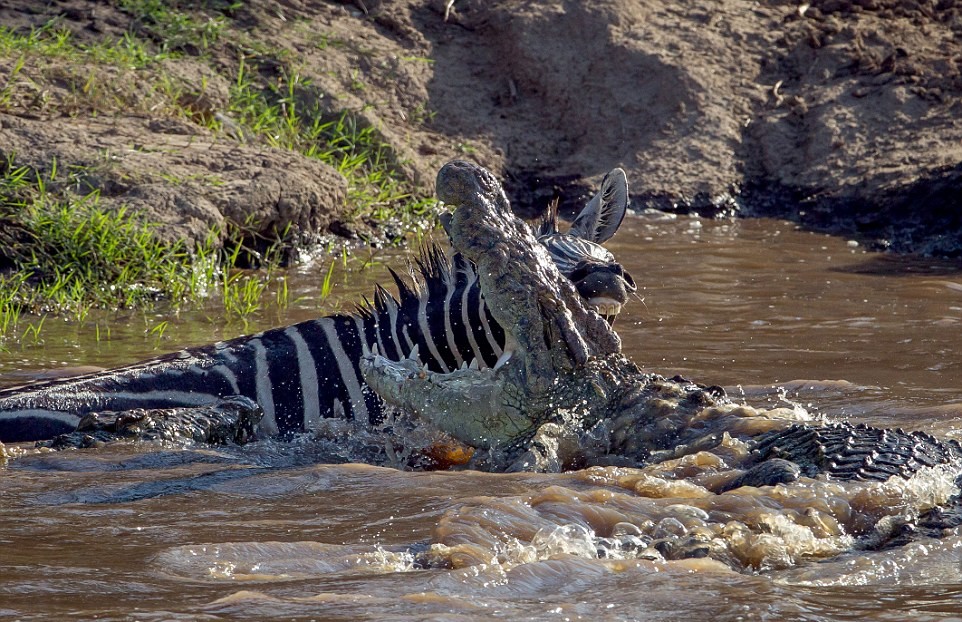 By the month of August, the herds spread throughout the Masai Mara’s northern region. This mostly takes place in the Northern Serengeti after experiencing severe challenges during the crossings.

Some of our Top Rated safaris with wildebeest Trails

To inquire or Book a safari Click link; https://africasafaritravellers.com/contact/

Our clients witnessing the lion attack. It’s a magical experience

As the new year begins, the grasses in the Southern part of Serengeti start to grow due to the rains. This attracts the wildebeests and their migration companions. From this point, the cycle continues while the calving season also commences.

The Great wildebeest migration is one of the most exhilarating, educational and fulfilling experiences that anyone could ever have.