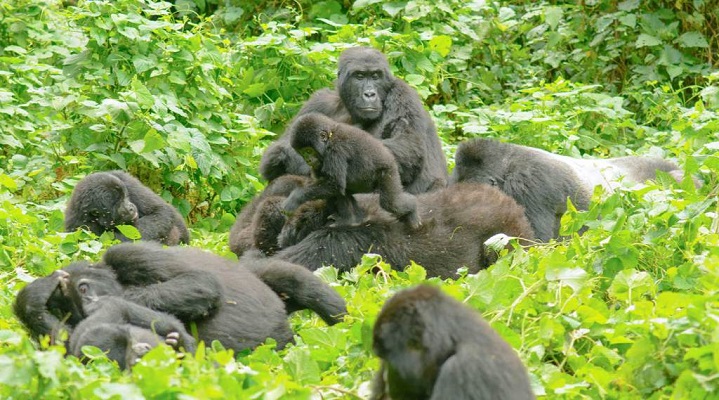 The Habinyanja gorilla family is one of the 19 habituated mountain gorilla families that are found in Bwindi Impenetrable National Park (https://africasafaritravellers.com/bwindi-impenetrable-forest-national-park/).

This family inhabits the Buhoma sector which we find in the Northern part of the park. It is also the most popular gorilla destination.

In addition, the Habinyanja family was one of the first gorilla families to be habituated in Uganda unlike many of the other families. It was habituated in 1997 and then received its first visitors two years later (1999).

Broadly speaking, habituation is the process of training gorillas to get familiar with human presence and interaction and it usually lasts for 2 years.

All about the Habinyanja family

You could probably be asking yourself, “What does the word Habinyanja mean”? Well, the name Habinyanja is a product of a local word, “Nyanja” which means a place of water. This gorilla family attained its name due to the fact that it was first sighted near a swamp in the Buhoma sector.

Just like any other family, the Habinyanja family had a leader called Mugurusi. The name of this silverback is a product of a local phrase that means “old man’s teeth.” Unfortunately, Mugurusi later passed away due to old age. Shortly after his death, two of his brothers; Mwirima and Rwansigazi shared power and were the family heads. This partnership didn’t last for long due to some in-differences between the two brothers; Rwansigazi was an adventurous leader whereas Mwirima preferred to stay close to his family.

In 2002, the two brothers separated without any fights and became independent family heads. The members that stayed with Rwansigazi were the Habinyanja family and those that went with Mwirima became the Rushegura family.

Eventually, the leader of the Habinyanja family gave up his leadership to Maraka who is the current leader.

In line with the foregoing, there is a terrifying incident that happened to the Habinyanja family in 2011. One of the family’s black backs known as Mizano – a very friendly mountain gorilla – met his end during an encounter with a group of poachers and their dogs. While he was trying to protect his family from the poachers, he sustained severe spear injuries around the neck and shoulders which killed him. This incident was reportedly the first that had occurred by poachers since 1995.

With regard to tracking this family, it is important to note that more energy is a requirement. This is because its members move through the forest on a daily basis. In addition, the number of members in this family changes from time to time. The changes are a result of births of new ones, death of some members or joining of other members into the family.

If you are interesting in pursuing the gorilla tracking experience, we have various amazing packages. Some of them include the following;

Get yourself a golden opportunity to see the Habinyanja family at close range in their natural habitat by making your gorilla trekking booking with Pamoja Tours and Travel (https://www.pamojatoursandtravel.com/).

Thank you for choosing Pamoja tours and travel.